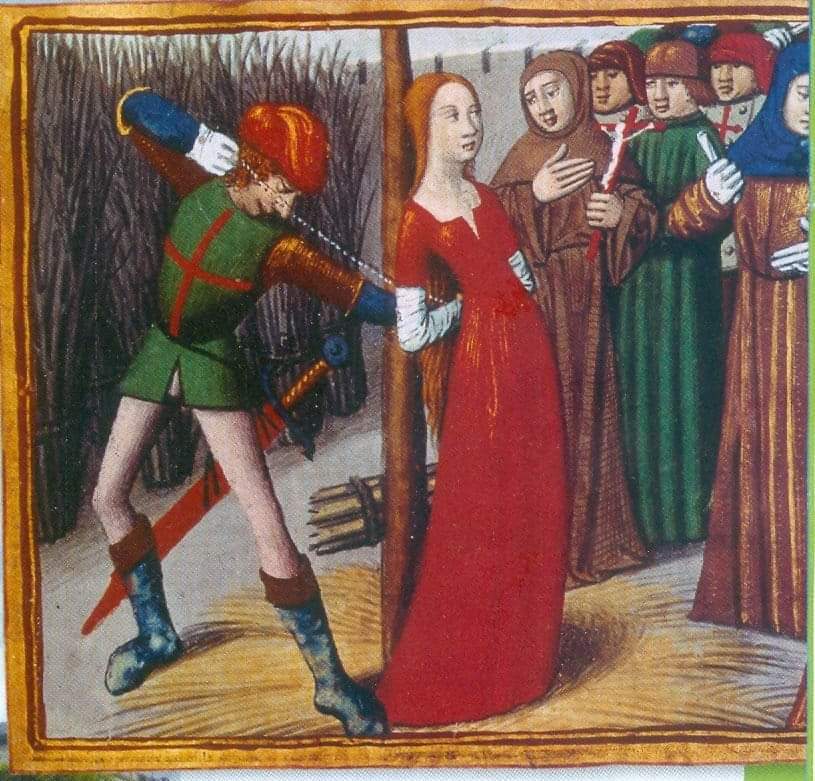 Trial of Joan of Arc begins.

Joan of Arc, the Maid of Orleans, had been captured by Burgundians at Compiegne in 1430. In a short period of time Joan had convinced nobles and royals that she saw visions and would lead France to a glorious victory. Those victories soon came, the French taking many places that had been occupied by English garrisons. French confidence had grown as English fears grew. The influence of Joan of Arc had to be stopped.

When Joan of Arc fell into the hands of forces from Burgundy, the English had their chance. England agreed a fee with Burgundy for the transfer of Joan into English custody. A trial was then set up. Joan was to be tried by sn ecclesiastical court. Her wearing of mens clothing was alleged to be heresy and ‘things contrary to the Catholic faith’.

The Duke of Burgundy and Duke of Luxemburg were among those called to present evidence to the vicar-general, lord inquisitor of heretical error, Martin Billion.

Joan’s guilt at this trial was assured. The verdict was to be reached by men appointed by the English, for the English. Joan’s own hand presented evidence against her, she had written to King Henry VI in March 1429 and started her letter by saying:

‘King of England, render account to the King of Heaven of your royal blood. Return the keys of all the good cities which you have seized, to the Maid. She is sent by God to reclaim the royal blood, and is fully prepared to make peace, if you will give her satisfaction; that is, you must render justice, and pay back all that you have taken’. (1)

King of England, if you do not do these things, I am the commander of the military; and in whatever place I shall find your men in France, I will make them flee the country, whether they wish to or not; and if they will not obey, the Maid will have them all killed. She comes sent by the King of Heaven, body for body, to take you out of France, and the Maid promises and certifies to you that if you do not leave France she and her troops will raise a mighty outcry as has not been heard in France in a thousand years. And believe that the King of Heaven has sent her so much power that you will not be able to harm her or her brave army.

Details of Joan’s trial are well documented. Minutes of the trial were kept and later translated into Latin, then English. The following extract (2) describes the opening of the Trial of Joan of Arc.

IN THE NAME OF THE LORD, AMEN

HERE BEGIN THE PROCEEDINGS IN MATTER OF FAITH AGAINST A DEAD WOMAN, JEANNE, COMMONLY KNOWN AS THE MAID.

To all those who shall see these present letters or public instrument, Pierre, by divine mercy Bishop of Beauvais, and brother Jean Le Maistre, of the order of Preaching brothers, deputy in the diocese of Rouen, and especially appointed in this trial to the office of the pious and venerable master Jean Graverent of the same order, renowned doctor of theology, by apostolic authority Inquisitor of the Faith and of Heretical Error in all the kingdom of France: greeting in the author and consummator of the faith, Our Lord Jesus Christ.

It has pleased divine Providence that a woman of the name of Jeanne, commonly called The Maid, should be taken and apprehended by famous warriors within the boundaries and limits of our diocese and jurisdiction. The reputation of this woman had already gone forth into many parts: how, wholly forgetful of womanly honesty, and having thrown off the bonds of shame, careless of all the modesty of womankind, she wore with an astonishing and monstrous brazenness, immodest garments belonging to the male sex; how moreover, her presumptuousness had grown until she was not afraid to perform, to speak, and to disseminate many things contrary to the Catholic faith and hurtful to the articles of the orthodox belief. And by so doing, as well in our diocese as in several other districts of this kingdom, she was said to be guilty of no inconsiderable offenses. These things having come to the knowledge of our mother the University of Paris, and of brother Martin Billorin, vicar-general of the lord Inquisitor of Heretical Error, they immediately summoned the illustrious prince, the Duke of Burgundy and the noble lord Jean de Luxembourg, who at this time held the said woman in their power and authority, in the name of the vicar-general above mentioned, and under penalty of law, to surrender and dispatch to us, as ordinary judge, the woman so defamed and suspected of heresy.

We, the said Bishop, according to our pastoral office, desirous of promoting with all our might the exaltation and increase of the Christian faith, did resolve to institute a proper inquiry into these facts so commonly known, and so far as law and reason should persuade us, to proceed with mature deliberation to such further decisions as were incumbent upon us. We required the said prince and the said lord Jean also, under penalties of law, to surrender for trial the said woman to our spiritual jurisdiction; whilst the very serene and most Christian prince, our lord the King of France and England, summoned them to the same effect. Finally, the most illustrious lord Duke of Burgundy and the lord Jean de Luxembourg graciously consenting to these demands, and solicitous in their Catholic souls of the accomplishment of what appeared to them as helpful to the growth of the faith, surrendered and dispatched the woman to our lord the King and his commissioners. Thereafter the King in his providence, burning with a desire to succor the orthodox faith, surrendered this woman to us, that we might, hold a complete inquiry into her acts and sayings before proceeding further, according to the ecclesiastical laws. When that was done, we requested the distinguished and notable chapter of the church of Rouen, charged with the administration of all spiritual jurisdiction in the vacancy of the archiepiscopal seat, to grant us territory in the town of Rouen for us to make this inquiry: which was graciously and freely given. But before preferring any further charge against this woman we held it wise to consult, with prolonged and mature deliberation, the opinion of experienced authorities in canon and civil law, of which, by God’s grace, the number in the town of Rouen was considerable. (2)

A full transcript of the trial is available via Fordham University (Public Domain). It is lengthy but includes all aspects of the hearing. (3)

Even following sentencing, as her execution was being prepared, Joan of Arc was questioned by members of the clergy. Her guilt of heresy could, possibly, result in an amended sentence should she accept that what she had said and done was heretical. These exchanges are also available, one example is:

‘The venerable and discreet master Pierre Maurice, professor of sacred theology, canon of Rouen, aged about 38 years, witness produced, received, sworn and examined on this day, said and deposed that he visited her in the morning of the day when the sentence was delivered against this Jeanne, whilst she was still in prison, to exhort her to save her soul: and whilst he was exhorting her and asking her about the angel who, according to her had brought the crown to him she called her king, he heard her answer that she herself was this angel.

Asked about the crown she promised him, and the host of angels who accompanied her, she answered that it was true that they appeared to her in the likeness of certain very minute things.

And finally when he had asked her if this apparition were real, she answered that it was, and whether good or evil spirits, they really had appeared to her, saying in French, “Soint bons, soint mauvais esperits, ilz me sont apparus.” She said also that she had heard her voices mostly at the hour of Compline, when the bells were rung; and also in the morning when the bells were rung. He told her it appeared that they were evil spirits who had promised her deliverance and that she had been deceived, whereupon the said Jeanne answered that this was true, she had been deceived. He heard her say that she referred to the Church to decide whether they were good or evil spirits, and in his opinion she was, when she said that, sound of mind and understanding’. (4)

The execution of Joan of Arc was carried out on 30th May 1431. Her body was burnt 3 times to totally destroy it. Orders were given for the ashes to be thrown into the River Seine to prevent any relics being used. That her body was totally destroyed was disputed c2005 when scientists discovered human remains among ashes. Whether the remains are those of Joan is unproven.

Image: Jeanne d’Arc being tied at the stake.
from Vigiles de Charles VLL by Martiat d’Auvergne, 1484

3 thoughts on “Trial of Joan of Arc”