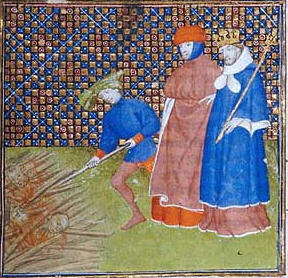 Jeanne Daubenton was a member of a group known as the Turlupins. This was a religious sect that was also known as the Society of the Poor or Fellowship of Poverty. In the second half of the fourteenth century the sect was active in France, mainly in and around Paris. The views of the sect were considered to be heretical and Jeanne Daubenton was amongst the members of the group who were arrested, tried, and executed for heresy.

Jeanne Daubenton, who is sometimes called Peronne Daubenton, was burnt at the stake as a heretic in 1372. Jeanne had become one of the ‘voluntary poor’ and had joined the Turlupin movement which espoused those views. Groups such as the Turlupins were not in themselves considered to be heretical, nor frowned upon. The church had granted permission for devout groups of lay women to live together in 1216. The Turlupin movement, however, went beyond simply living together in a pious and devoted manner.

In the early 1370’s Parlement in Paris discussed the rise in the popularity of groups such as the Turlupins. These groups had members who had begun preaching, something that had not been approved by the church. Not only that but the views were challenging to the social order within medieval France. Whilst associations of devout lay women often included many who were poor as a result of their birth or circumstance, they also included women who had chosen to relinquish their wealth and adopt a voluntary poverty. This mirrored the teachings of these groups. Whereas poverty had previously been viewed as a blow of fortune, or a consequence of a persons place in the social hierarchy, it now became a virtue. It was something to aim for, not something to avoid, or be ashamed of.

That these views were being preached by members of groups such as that which Jeanne Daubenton was a member was an issue of concern. The teaching challenged the wealth of the church, the nobility, and raised questions over the accumulation of wealth at any level. In a similar manner to Lollardy, or the theories of John Wycliff in England, the ideas were increasingly threatening to those in power should views go beyond theoretical academic discussions.

The Inquisition: Jeanne Daubenton arrested, then Burnt at the Stake as a heretic

The Inquisition clearly thought that the preaching had gone beyond theoretical. In the I’ll de France church officials began a crackdown on unconventional preachers. One of those who was arrested was Jeanne Daubenton. Jeanne was charged by Parlement in Paris of being a leader of the Turlupins. Found guilty of heretical preaching Jeanne Daubenton was burnt at the stake.

Comparisons with other groups and individuals

The Turlupins were not the only active group whom the church considered to be heretical in the later middle ages. The Cathars and Waldenses were both movements with many female members whose teachings were viewed as heresy. Lollardy in England also attracted women among the movements followers. The teachings of women such as Jeanne Daubenton and others from these groups are a stark contrast to the way in which other women such as Joan of Arc were able to utilise religion as they gained influence.

Retrial of Joan of Arc

Google Books: The Fourth Estate, A History of Women in the Middle Ages

Google Books – The Margins of Society in Late Medieval Paris

Encyclopedia.com – Women Prophets and Visionaries in France at the End of the Middle Ages

The burning of the Cathar heretics, wikimedia.