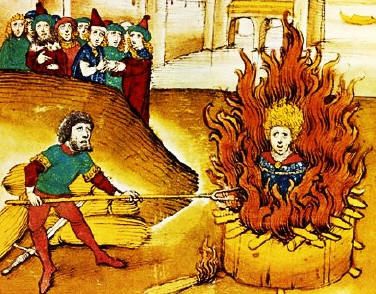 Pierronne of Brittany was a contemporary of Joan of Arc. Like Joan, she was involved in military campaigns, and was also executed by being burnt at the stake. Pierronne was a visionary, claiming to have beheld God in a long white robe and purple cloak. She first appears in documents alongside Joan of Arc and Catherine de La Rochelle, another visionary, at the small garrisoned town of La Charité.

At la Charité Joan of Arc called upon a small number of men to fill the moat around the town with faggots and storm the walls. The assault that she commanded was a success, despite a much larger and more organised attack having being repulsed with ease only moments before. It was one of the earliest of Joan’s miraculous victories, with a squire who had tried to persuade the ladies to move from within arrow shot of the walls believing that the mystics had conjured up an army of fifty thousand shadows to seize the town, for there were only a handful of men who he could see.

As one of the visionaries who accompanied the French army on it’s bid to oust the English, Pierrone of Brittany was a wanted woman. Like her more famous companion, the English were eager to be rid of the talismanic women who seemed capable of delivering against the odds victories for the French.

At Christmas of 1429, a simple event provided the English with a ‘crime’ that they could charge Pierronne of Brittany, or any of the other female visionaries who accompanied the French army at Jargeau. In jargeau, a Dominican Friar by the name of Brother Hélie Boudant said masses and administered communion. Among those in attendance at the mass, and receiving communion, were Pierronne of Brittany, Joan of Arc and Catherine de La Rochelle.

Whilst there was no canon law forbidding the taking of communion by women, it was frowned upon at the time. Furthermore, Brother Hélie Boudant had been summoned to Poitiers to face unknown charges against him from the English controlled Parlement. The communion was deemed to be illegal. To add to this, another friar, Brother Richard, who accompanied the women with the French army, also had his teachings questioned. Just days after the communion in jargeau, a treatise was published in Paris by the University that denounced Brother Richard. De bono et malign spiritu became a legal mechanism by which the church could press charges against any of these visionary women.

Legal and theoretical actions in Poitiers and Paris did little to stop Pierronne of Brittany. At easter of 1430 she is known to have travelled into the Loire Valley. Here the French expected to face an assault from the Burgundians. The visionaries would be morale boosting in the campaign and seemed incapable of losing on the field of battle.

In spring of 1430 the army of France moved on the town of Melun. From there the female visionaries set out for Lagny-sur-Marne, to aid in the next aprt of the campaign. At Corbeil, the group was disturbed by English soldiers. Joan of Arc and others were able to evade arrest. Pierronne and one other woman were less fortunate and were taken into French custody.

Pierronne was taken to Paris where she was placed in an ecclesiastical gaol. Charges were made against her of offending God and his Holy Religion. The Grand Inquisitor of France, Brother Jean Graverent, was to hear the case against Pierronne.

The case was unusual. The church could not prosecute her for having taken communion. Instead, they used Pierronn’s own words against her. Whilst in gaol she openly talked about her visions. In saying that she talked to God, she was represented as blasphemy.

The Grand Inquisitor found the women guilty of being possessed by evil spirits. On 3rd September 1430 Pierronne and another convicted visionary were taken to hear a sermon at parvis Notre Dame. It was an opportunity for the women to repent.

The woman who had been convicted alongside Pierronne confessed. She said that the devil had seduced her and renounced her behaviours. This allowed her to be cleansed and to live. Pierronne, however, refused to retract any of what she had said. In failing to seek forgiveness she was found to be beyond the help of the church. She was led from the sermon and straightaway executed by being burnt at the stake.

One thought on “Pierronne of Brittany”