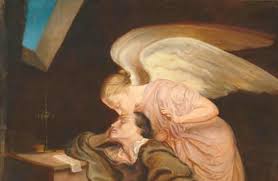 Catherine de La Rochelle was a mystic who was referred to in the Trial of Joan of Arc. She, along with Brother Richard, are the two known named visionaries whom Joan of Arc met in person.

Catherine de La Rochelle is said to have arrived at La Charite as the French were about to assault the town. She appears to be similar in vein to Joan of Arc, but the pairs relationship, though brief, suggests that the two maids had different approaches to the conduct of war. At La Charite Catherine of La Rochelle is said to have advised caution due to the weather, whereas Joan of Arc called on an immediate assault even in the face of having observed the defenders repel a full scale attack.

What is clear from the limited information available about Catherine of La Rochelle is that visionaries could wield great influence over the general population. It appears that she was utilised as part of the fundraising campaign required to enable the ongoing campaigns of the Dauphin’s armies again the English.

Some articles on Catherine de La Rochelle note that in 1429 she spent the night with Joan of Arc, leading to some speculation as to the sexuality of the two women. There seems to be little to corroborate this suggestion other than supposition.

Most of what is known about Catherine de La Rochelle comes from the testimony given at the Trial of Joan of Arc.

THE BISHOP. – Do you know Catherine de La Rochelle? Have you seen her?

THE BISHOP. “Did she not show you a lady dressed in white, whom she said, who never appeared to her?”

THE BISHOP. – What did this Catherine tell you?

JEANNE. – This Catherine told me that this white lady dressed in gold cloth came to her, who told her that she was going through the good towns, and that the King would give her heralds and trumpets to make shout that whoever would have gold, silver or mussé treasure, brought it immediately; and that those who would not do it, and who would have mussés, she would know them well and would know how to find the said treasures; and it would be to pay my men-at-arms. To which I replied that she would return to her husband, do her housework and feed her children. And to know the certainty of it, I spoke about it to Saint Marguerite or Saint Catherine, who told me that because of this Catherine was only madness, and that it was completely nothing. I wrote to my King that I would tell him what to do with it; and when I came to him, I told him it was madness and nothing because of Catherine. However, Brother Richard wanted it to be implemented. And brother Richard and said Catherine were very unhappy with me.

THE BISHOP. – Did you not speak to Catherine de La Rochelle about going to La Charité?

JEANNE. – Said Catherine did not advise me to go there, saying that it was too cold and that she would not go. She wanted to go to the Duke of Burgundy to make peace, and I told him that it seemed to me that there would be no peace there, if it were not by the end of the spear. I asked Catherine if this white lady who appeared to her came every night, and for that, I would sleep with her. And I lay there, and stayed up until midnight, and saw nothing, and then I fell asleep. When morning came, I asked if she had come: and she replied that she had come, and that I was sleeping and that she had not been able to wake me. So I asked her if she would not come the next day, and she said yes. For which thing, I slept during the day, in order to be able to watch at night. And I slept the next night with Catherine, and stayed up all night. But I saw nothing, although I often asked her if she would not come. And Catherine would reply: yes, earlier.

The Trial of Joan of Arc

Joan of Arc and Female Mysticism