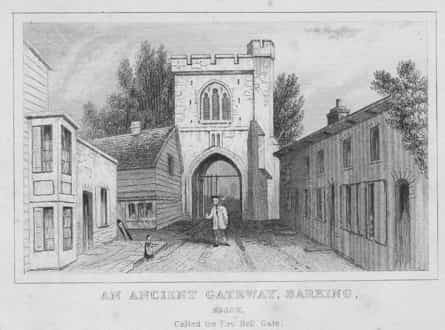 Katherine of Sutton is the earliest female playwright whose name has been recorded in England. Between 1358 and 1376 Katherine, the Abbess of Barking, wrote or revised the Easter Plays that were performed at the nunnery. The plays were liturgical dramas written in Latin and designed to be sung as a means of retelling a story from the bible. Barking Abbey was a wealthy and influential nunnery. At this period of time it only accepted nuns from wealthy, noble families.

In the absence of full biographical details for Katherine of Sutton, we can assume with some certainty that she was the daughter of a noble of some rank. With the nunnery being close to London, and with its nuns having links to the highest levels of society, it follows that as Abbess, Katherine of Sutton would want to ensure that performances were of the highest standard. This would portray the nunnery and herself in the best light which would lend itself to acquiring further patronage, grants, donations and status.

Katherine of Sutton, An Abbess with the rank of Baron

That acquisition of patronage and financial support was the norm for nunneries of any status. Barking was not typical of nunneries as a whole though. As Abbess at Barking, Katherine of Sutton was a tenant-in-chief. The nunnery was held directly from the crown, giving the abbess the same rank, responsibilities, and duties as a baron. It may seem a little odd for a nunnery to have these expectations but the designation meant that as well as the religious aspects of running a wealthy religious house, Katherine had a responsibility to provide knights, soldiers and the materials required for war.

Military responsibilities of a Katherine of Sutton

Whilst military responsibilities may appear to be at odds with the role of a nunnery, the method of fulfilling the role by Katherine of Sutton, or any other Abbess was relatively simple. As a tenant-in-chief the Abbess held a range of manors. These could be leased out to provide the nunnery with finances, goods, or service. In this way, Abbesses could provide for the crown in time of war. The manor of Barking itself is an example of this. It was a large manor within an area that had the Abbeys demesne, freemen holders of land, and tenants of lands held of the Abbess.

Katherine of Sutton: rights compare to those of male equivalents

This was replicated over other manors held by the nunnery. It meant that the Abbess had a land management responsibility and role that was no different to that of any male tenant-in-chief. Indeed, the only difference of note between the role of an Abbess who had control of lands and a bishop, or baron, with similar estates held of the king was that an Abbess did not receive a summons to parliament in the same way that her male equivalent may do.

The Easter Plays of Katherine of Sutton

Plays that retold the Easter Story were well established within the ecclesiastical world. On a basic level it is little different to a religious community performing a nativity play in the modern day. The story of the Last Supper, Crucifixion, and Resurrection are and were the most important parts of Jesus’ story in terms of the teachings of the church. It made sense for the story to be related to the lay community in an understandable manner. This can clearly be done through sermons, icons, wall paintings, the stations of the cross, and the eucharistic prayer within a Catholic church service. A play is another way of representing the story.

Ordinale and Customary of the Benedictine Nuns of Barking Abbey

Katherine of Sutton appears to have seen the potential of these plays to be highly effective methods of making the liturgy visual, understandable and memorable.  What evidence remains is rather limited, The Ordinale and Customary of the Benedictine Nuns of Barking Abbey is dated to 1404, it is held in the archives at the University of Oxford and includes the liturgical dramatisations attributed to Katherine of Sutton.

The plays come in four parts:

This play was performed on Good Friday. it depicts Jesus being taken down from the cross by Joseph and Nicodemus. Katherine of Sutton’s version of this play is unique. The play includes the washing of Jesus’ wounds. This does not occur in any other version of Depositio. The remainder of this play centres around Jesus’ body being wrapped in a traditional woollen coverlet and his burial.

Known as the Harrowing of Hell this part of the liturgy is when Jesus endures the the descent into Hell. He rescues the trapped souls that are there and they are freed from the torments of hell. To visualise this Katherine of Sutton’s play has all but the officiating priest and two deacons in a side chapel, out of sight of the lay audience. From here they sing the Descensus Christi. The priest and two deacons then move from the main altar to the door of the side chapel and sing Tollite portas which relates to Jesus tearing down the gates of hell to release the tormented souls. Once this is performed, the door of the side chapel was opened and the priest leads a procession of those who had been ‘trapped’ in the side chapel through the church and out of the main door. It visually represents the souls having been released and making their way from hell and through purgatory.

Immediately after the Descensus Christi the Elevatio is performed. This is the ressurection of Christ. In it the priest enters the tomb where Jesus has been buried in the Depositio. He recites a prayer called ‘the Lord’s body in a glass’ and sings Christ is Risen. The Lords body in a glass appears to be quite similar to a humeral veil that would hold a monstrance containing a consecrated host. These are used within Catholic ceremonies such as the Adoration of the Blessed Sacrament

The Three Mary’s, played by nuns in white, visit the tomb of Jesus and find that it is empty. Following this the play moves on to Jesus appearing to Mary Magdalene who does not know that Christ has risen from the dead. It follows the brief passage from the Gosepel according to John [20:15]:

Jesus said to her,
“Woman, why are you weeping?
Whom are you seeking?”
Supposing him to be the gardener,
she said to him,
“Sir, if you have carried him away,
tell me where you have laid him,
and I will take him away.”

The adaptations to the plays are unique in terms of when they were performed. Traditionally the Elevatio was performed before Matins but Katherine’s instructions have it after this part of the standard day within the nunnery.

Julienne du Guesclin was a nun in France who fended off an attack on her convent from English soldiers.

Jeanne Daubenton was a leader of a French Religious group. It contrasts with traditional female roles within the church and was considered to be heretical.

Catherine de La Rochelle was a contemporary of Joan of Arc, being cited in the Maid of Orlean’s trial. She too was executed for heresy.

Egidia was not a nun but she had comparable land responsibilities. Her life story illustrates the problems that landed ladies could have from noble men, but also shows that the law enabled female inheritance.

Barking Abbey Gatehouse. ‘Curiosities of Great Britain. England and Wales Delineated,’ showing the abbey in Essex, but now in the London Borough of Barking and Dagenham. Published c.1845 by Thomas Dugdale.

A consecrated host placed in a typical sunburst monstrance or ostensorium for adoration. LaRedCultural via Wikimedia. CC BY-SA 3.0