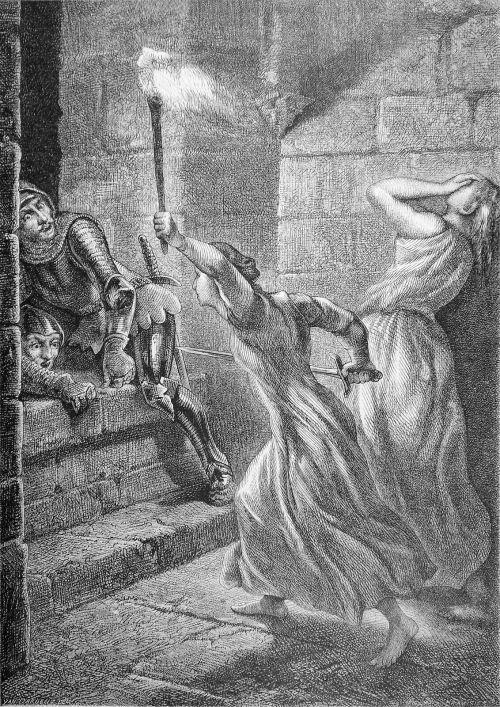 Julienne du Guesclin was the sister of Bertrand du Guesclin, the famous French military commander and Constable of France. Julienne had entered into a religious life, becoming a nun in the religious of of the Benedictine sisters. Julienne gained fame for her feat of arms in defending the convent in which she was a nun.

In 1370, Julienne’s brother had just been named Constable of France in recognition of his successes against the English in Normandy. The fighting was still taking place sporadically. Now, it threatened the convent at Pontsoron, 10 kilometres south of Mont Saint Michel, where Julienne was living and worshipping.

An English captain decided to target the convent. French texts name the captain as either Thomas or William Fellerton, or Felletton. Presumably this refers to Sir Thomas Felton who was a captain in the Black Prince’s force and was active in the region at times. His brother, Sir William Felton, had died in 1367, so if the texts are accurate in saying 1370, it cannot have been him.

The English made their move at night. Undetected at first, the English crept up to the convent walls, carrying scaling ladders to make heir entrance easier. The ladders were placed against the wall at a point that would allow them to force entry through one of the windows. Unbeknown to the assailants, the room was occupied by two women, one of whom was Julienne du Guesclin.

The noise of the soldiers climbing the ladder woke Julienne. Realising what was happening, she acted fast. Legend has it that Julienne donned some of her brothers armour, and grabbed a sword, in order to defend the convent. Whether those items would be available is debatable. What is not, is that Julienne prevented the English from getting through the window. French stories of the incident have Julienne knocking three English soldiers from the ladder, to their deaths.

As the attackers fell to the ground, Julienne raised the alarm by crying out for help. It was enough to make the remainder of the English force retreat.

The next day, Bertrand du Guesclin made his way toward the convent. Having heard of the attempted attack by the English he wanted to check on the welfare of his sister, and that of his wife, who was reportedly staying at the convent whilst he fought in the area. As he travelled to Pontsoron, he happened across a group of English soldiers. They were overwhelmed and taken as prisoners.

Bertrand du Guesclin arrived at the convent with the prisoners in his custody. Upon seeing the prisoners, Bertrand’s wife is reported as having identified one of the men as the captain who had overseen the night assault. One 19th century French history of the event notes her response:

Brave Felleton, she said, there you are again! It is really too much for a man to run like you to have been beaten, in the eleven hour interval, once by the sister and once by the brother.

Much of the story of Julienne du Guesclin is hard to verify. It receives little attention in chronicles and much of the tale as we know it is based upon accounts written several hundred years after the event. These may portray Julienne as being a little more warrior like than was truly the case. It is not beyond the realms of possibility that elements of the legend are accurate though. Many women at the time were used to defending their properties and in a region in which raiding had been frequent for some 30 years, it is entirely possible that a convent would have had the means to defend itself.

Julienne du Guesclin became something of a heroine as a consequence of her role in warding off the English. Her exploits came shortly after other well known women had played a significant role in warfare in neighbouring Brittany and along the Normandy Coast. Similarly women often oversaw the defence of property in the British Isles. Agnes Randolph successfully defended Dunbar Castle against a large army led by the Earl of Salisbury at the beginning of the Hundred Years War. A century later, Caister Castle was defended by Margaret Paston along with her sons.

Julienne became the Abbess of Saint-george in Rennes. She died in 1405, aged 72.