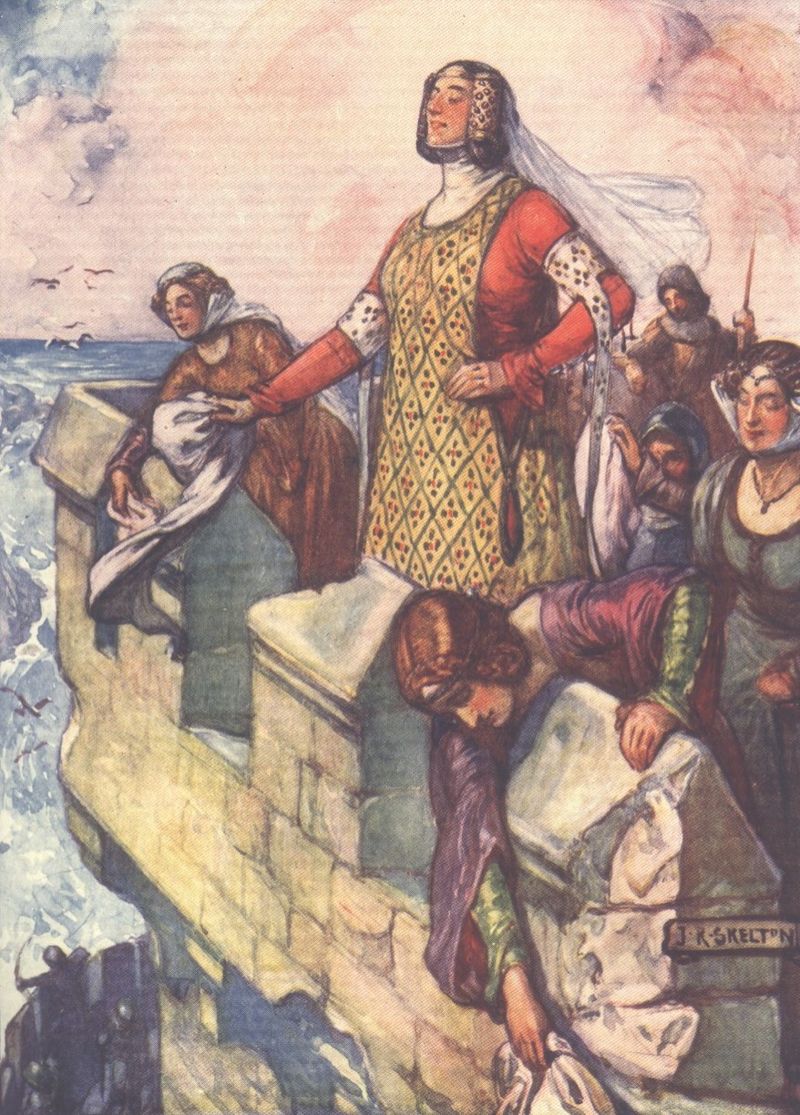 Agnes Randolph, Countess of Dunbar and March won fame for her stoic and successful defence of Dunbar Castle. In January 1338 a large English army commanded by the Earl of Salisbury surrounded the castle. Agnes’ husband and many of the men were away from the castle on campaign.

The English, numbering in the thousands, would have presumed that the Castle would accept terms and be easily taken. Afterall, only a few guards were present alongside the Countess and her maids. Agnes, however, was intent on making the capture of her castle as difficult as possible. When the English demanded her surrender, legend has it that she replied:

Of Scotland’s King I haud my house, I pay him meat and fee, And I will keep my gude auld house, while my house will keep me.

And so the English were forced to begin a siege. The Earl of Salisbury had his men use trebuchets to hurl stones at the walls. Agnes and her ladies mocked the English efforts, reputedly dusting off the battlements with kerchiefs after each stone was fired as a show of disdain.

Use of a sow

Then the English turned to the use of a siege tower. Again, there is reputed to have been an exchange of words between the Countess and Earl, in which she is believed to have said that the Earl should, ‘take good care of his sow, for she would soon cast her pigs [his men] within the fortress’. The sow is the name for a siege tower. Agnes already had her physical response to its construction at the ready. As it drew close to the walls, the countess simply had her guards drop one of the larger rocks that the English had catapulted into the castle onto the sow. It destroyed the siege tower, leaving the Earl of Salisbury perplexed and having to resort to guile, bribery and an attempt at frontal assault.

The Earl managed to bribe one of the guards. In return for payment, the guard would ensure that the gatehouse was left insecure. The English could then storm the entrance and overwhelm the few guards who were in the castle with the countess. Unfortunately for the English, the guard was loyal to Agnes. He took the Earl’s money, then promptly told the countess of the English plan. The Earl’s guile was then intended to be turned on him. As the English rushed the gates the Earl led from the front for most of the dash. He was overtaken as they neared the gate. The guards had been instructed to trap the first man through, by dropping the portcullis. It had been hoped that this would be the earl himself, in the event it was one of his men-at-arms.

Threats are made about the life of the Earl of Moray

With the siege dragging on, the English then decided to use threats. The countess’s brother, the 3rd Earl of Moray, was a prisoner of the English. He was dragged in front of the walls of Dunbar Castle with a rope fastened around his neck. If the castle did not surrender, the Earl of Salisbury said, the countess would see her brother hanged. Agnes Randolph was unmoved. Instead of fearing for her brother’s safety, she simply replied that his death would benefit her as she was the heir to much of his estate.

It seemed that the siege would continue until the tiny garrison was starved into submission. The English could afford to leave a force sat outside Dunbar Castle and wait. They had not banked on the castle being relieved and resupplied by sea though. Sir Alexander Ramsay and forty men sailed unnoticed toward a postern gate. The Scots in the castle charge the nearest English soldiers as the boat came into view, forced them back, and enabled the garrison to be enlarged and supplied.

The English lift the Siege, ‘Black Agnes’ is victorious

The Earl of Salisbury was left facing a humiliating defeat. An enlarged garrison would be difficult to defeat, even with his massive numerical superiority. After five months of failed attempts at seizing the castle, the Earl and his English army lifted the siege. Countess Agnes, her maids, and a handful of Scottish soldiers had seen off the might of the English army.

A depiction of ‘Black Agnes’ in H E Marshall’s ‘Scotland’s Story’, published in 1906.

One thought on “‘Black Agnes’ Randolph”