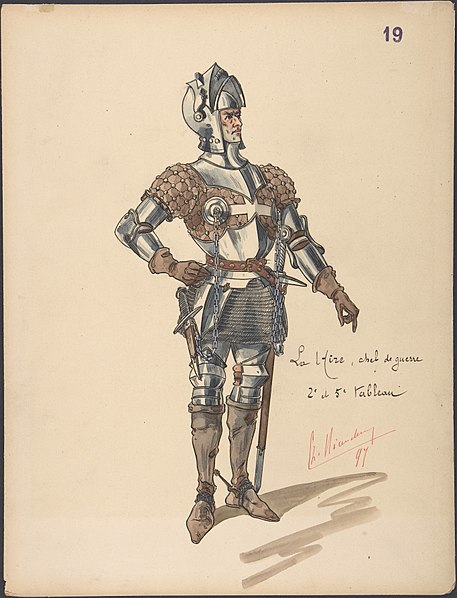 La Hiré was the common name for Etienne de Vignolles. Born in 1390 he became one of the best known and respected of French military commanders of the 1420s and 1430s. His rise in prominence is strongly associated with the role of Joan of Arc. La Hiré’s fame was such that upon his capture by the English his ransom was set at a staggering 14,000 Saluts d’Or (gold coins).

La Hiré first joined the army of King Charles VII in 1418. It was a period in which the English were in the ascendancy following the victory at Agincourt and the gradual conquest of Normandy. La Hiré was present as the English suffered a rare defeat. At the Battle of Baugé, an English force led by the Duke of Clarence attacked a Franco-Scottish force. The English acted rashly, Clarence deploying his men-at-arms in an assault before the whole army was ready and without support from archers. The defeat of the English gave the French new hope, their enemy could be beaten, and the English heir to the throne, Thomas Duke of Clarence, had fallen in battle.

The aftermath of the Battle of Bauge saw the return of Henry V of England to France. He oversaw a campaign aimed at eliminating the threat posed by the Dauphin. At this time France had signed the Treaty of Troyes and the French crown, under the terms of that treaty, was to pass to the English upon Charles VIIs death. The Dauphin was fighting for his inheritance, France. It was on these campaigns that la Hiré gained valuable experience as a scout and observer.

These clashes between forces loyal to the Dauphin and those of England continued after the death of King Charles VII. It was in the late 1420s that La Hiré became invaluable to the Dauphin. La Hiré was a believer in Joan of Arc from her early prophecies. His commands in battles and sieges in 1429 and 1430 were at her side. As the French gained successes on the field of battle and gradually forced the English out of Normandy, La Hiré’s fame grew.

This short period of time saw a rapid succession of French victories. While Joan of Arc is by far the most acclaimed of the leaders, La Hiré too was present and saw his reputation enhanced. Victories at Orléans, Jargeau, Meung-sur-Loire, Beaugency and smaller clashes saw the Dauphin’s army, commanded by men such as the Duke of Alecón and La Hiré, push the English back towards Paris and into retreat in Normandy.

At the Battle of Patay, La Hiré commanded the vanguard. The battle saw the French rout the English, suffering minimal losses themselves whilst devastating the army that had held the Loire for England.

It was at this point that La Hiré and the other commanders adopted a strategy suggested by Joan of Arc, rather than having originated from one of the male commanders. Joan argued for a campaign to take Rheims. This was a surprising strategy. Paris and Normandy both seemed to be attainable objectives. Rheims, however, was a symbolic target. It was in Rheims, not Paris, that King’s of France were crowned and to this point, neither Henry VI of England nor the Dauphin had been crowned.

In May 1430 Joan of Arc was captured in an ambush by Burgundian forces. La Hiré was one of the commanders who led attacks attempting to rescue their talisman. His ongoing raids against the English enhanced his reputation further. In the spring of 1431, La Hiré himself was captured by the Burgundians. A series of letters between the French and La Hiré’s captors resulted in a sizeable ransom being set, agreed to, and paid by the French:

“At length he obtained his liberty, and paid for his ransom fourteen thousand Saluts d’Or, and a horse of the value of twenty tons of wine.[i]”

Following his release, La Hiré was exempted from repaying the cost of his ransom. He became Captain-General of Normandy in 1438, after having defeated the English at the Battle of Gerberoy in 1435. He was active in the field until shortly before his death, having been present at the victories at Pointoise and capture of La Réole.

[i] The Chronicles of Enguerrand de Monstrelet. Page 178.