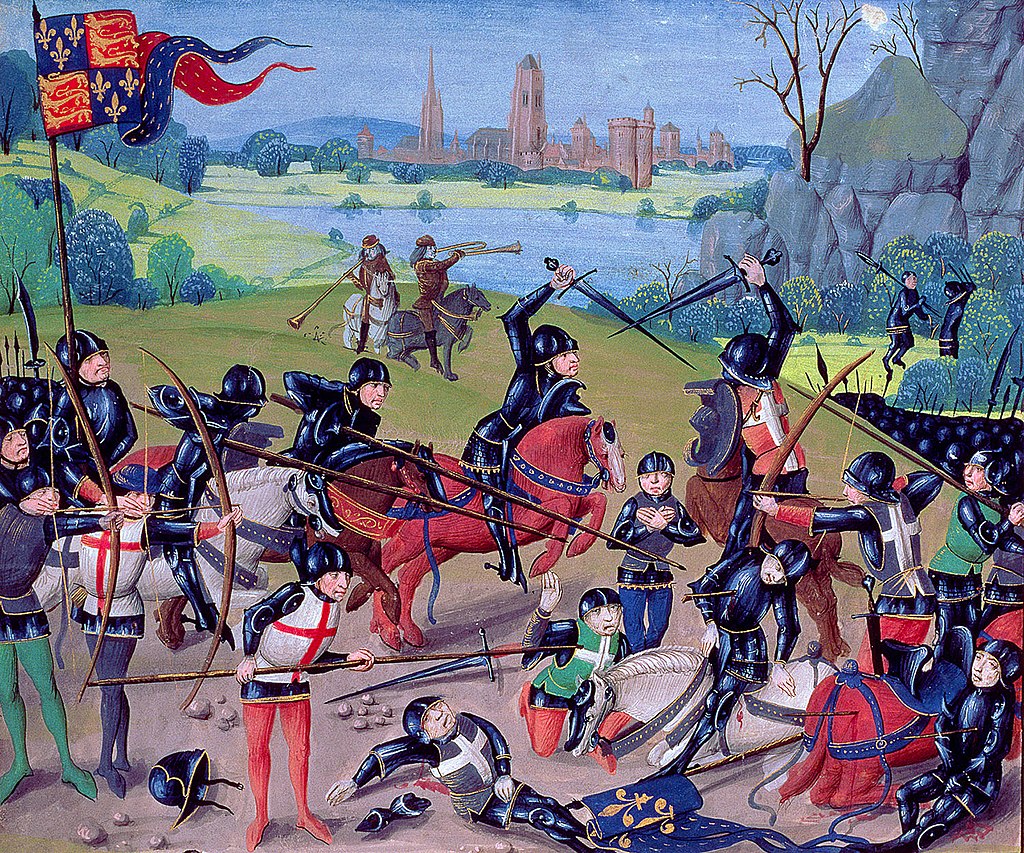 Following Henry Vs decision to allow his fleet to depart Harfleur to embark on the economically vital wine convoys, the English army had set out to march to the safety of Calais.

After fifteen days’ residence in Harfleur, the king of England departed, escorted by two thousand men-at-arms and about thirteen thousand archers, and numbers of other men, intending to march to Calais. His first quarters were at Fauville and in the adjacent places: then, traversing the country of Caux, he made for the county of Eu. Some of the English light troops came before the town of Eu, in which were several French men-at-arms, who sallied out to oppose them: in the number was a most valiant man-at-arms, called Lancelot Pierres, who, leaving attacked one of the English, was struck by him with a, lance, which piercing tile plates of his armour, mortally wounded him in the belly, and being thus wounded, he was killed by the Englishman; to the great grief of the count d’Eu and many of the French. Thence the king of England marched through Vimeu, with the intent of crossing the river Somme at Blanchetaqne, where his predecessor, king Edward, had passed when he gained the battle of Crecy against Philip de Valois; but learning from his scout, that the French had posted a considerable force to guard that ford, he altered his route, and marched toward Arraines, burning and destroying the whole country, making numbers of prisoners and acquiring a great booty.

This route to Calais became blocked, resulting in a detour down the Somme Valley being required. Having outpaced the French, Henry V and his force crossed the Somme and turned north.

The French met at Rouen to determine their response to the English armies move.

When the matter had been fully discussed in the king’s presence, it was resolved by thirty of the said counsellors, that the king of England should be combated. The minority of five gave substantial reasons against fighting the English army at the time they had fixed on; but the opinion of the majority prevailed. The king of France instantly sent his commands to the constable, and to his other captains, to collect incontinently as large a force as they could, and give battle to the king of England. Orders were likewise dispatched through every part of the realm for all noblemen accustomed to bear arms to hasten day and night to the constable’s army wherever it might be.

The French armies that had been arrayed to combat his invasion had shadowed his movements and combined. They chose to cut off the English march between the villages of Agincourt and Tramecourt, blocking the route to St. Omer. The English army was exhausted, both physically and in terms of numbers. Around 5000 men of Henry Vs expedition remained, and they had been marching hard, on low rations. The French numbered around 20000 and had not been subject to the same level of exertion as they tracked the English.

After deliberations about whether to wait for further men, the French decided to take to the field. They assumed that the English would form up in their traditional manner, with lines of men-at-arms to the centre and units of archers ahead of these, on the flanks. The French planned to overwhelm the archers with cavalry, then use sheer weight of numbers to crush the English men-at-arms and infantry. As they formed up, they then took the decision to force the English to make the first move, making their task even easier.

Then, by the advice of the constable and others of the king of France’s council, the army was formed into three divisions, the vanguard, the main body, and the rearguard. The van consisted of about eight thousand helmets, knights, esquires, four thousand archers, and fifteen hundred crossbows. This was commanded by the constable, having with him the dukes of Orleans and Bourbon, the counts d’Eu and de Richemonte, the marshal Boucicaut, the master of the crossbows, the lord de Dampierre admiral of France, Sir Guichart Dauphin, and some others. The count de Vendome, and others of the king’s officers, were to form a wing of fifteen hundred men-at-arms, to fall on the right flank of the English; and another wing, under the command of sir Clugnet de Brabant, admiral of France, sir Louis Bourdon, and eight hundred picked men-at-arms, was to attack the left flank: with this last were included, to break in on the English archers, sir William de Savenses, with his brothers sir Hector and sir Philippe, Ferry de Mailly, Aliaume de Gaspamines, Allain de Vendome, Lamont de Launoy, and many more. The main battalion was composed of an equal number of knights, esquires, and archers, as the van, and commanded by the dukes of Bar and Alencon, the counts de Nevers, de Vaudemont, de Blallmont, de Salines, de Grand-pre, and de Roussy. The rearguard consisted of the surplus of men-at-arms, under the orders of the counts de Marle, de Dampmartin, de Fauquembergh, and the lord de Louvroy, governor of Ardres, who had led thither the garrisons on the frontiers of the Boulonois.

The English did employ the tactics that the French commanders had assumed, but with subtle changes. Groups of archers were mixed in with the men-at-arms, so arrows would come from the front and sides. The archers to the flanks carried sharpened spikes, that they hastily put into place in front of their lines as they took up positions. Additional groups of archers were placed on the edge of woods that were on either side of the battlefield.

The English did advance as the French had hoped they would. As they did, they repeated the task of checking formation. When within longbow range, the formations stopped, embedded the spikes and, to the surprise of the French, loosed volleys of arrows into their lines straight away.

[The French knights] struck into these English archers, who had their stakes fixed in front of them… their. horses stumbled among the stakes, and they were speedily slain by the archers, which was a great pity. And most of the rest, through fear, gave way and fell back into their vanguard, to whom they were a great hindrance; and they opened their ranks in several places, and made them fall back and lose their footing in some land newly sown; for their horses had been so wounded by the arrows that the men could no longer manage them.

The French responded by sending the Cavalry to crush the units of archers. It failed as the deployment of archers in the woods and within the front lines of the men-at-arms meant that the horses and their riders were hit from all sides. Those that did make it to English lines then found their horses turning from the spikes, or becoming impaled. This simply made it harder for the following riders to manoeuvre, adding to the carnage.

A similar fate met the French men-at-arms. Though they met the English head on and enjoyed some early successes, the narrow muddy field and ability of the English to strike the massed formation with arrows led to many French being killed whilst unable to move, and units unable to adapt tactics.

During this great assault the most serene brother of the king, Humphrey duke of Gloucester fought bravely and without caution. Having been pierced by the point of a sword, he was thrown to the ground half dead. His brother the king himself put his feet astride the legs of Humphrey. For the renowned duke fell with his head against the king’s feet but with his feet to the enemy. In this position the king fought most courageously for a long time so that his brother might be carried safely away from the enemy to his own men.

Amid the chaos of the melee, there was a rumour among the English that a new French army was about to enter the field of battle. Henry V was not willing to take any chances. He gave an order, against the conventions and rules of chivalry, to execute most of the prisoners that had been taken by the English, leaving just the most important captives alive.

When the King of England perceived them coming thus he caused it to be published that every one that had a prisoner should immediately kill him, which those who had any were unwilling to do, for they expected to get great ransoms for them. But when the King was informed of this he appointed a gentleman with two hundred archers whom he commanded to go through the host and kill all the prisoners, whoever they might be. This esquire, without delay or objection, fulfilled the command of his sovereign lord, which was a most pitiable thing, for in cold blood all the nobility of France was beheaded and inhumanly cut to pieces, and all through this accursed company, a sorry set compared with the noble captive chivalry, who when they saw that the English were ready to receive them, all immediately turned and fled, each to save his own life. Many of the cavalry escaped; but of those on foot there were many among the dead.

Victory against a force some four times its size was eventually achieved by the English. It was a stunning success. French tactics and a poor choice of location played a part. So too did the improvised approach adopted by Henry V. The Longbow and its ability to penetrate armour, became famed for its part in the victory.

When the heralds completed the grim task of counting and identifying the dead, the French casualty list included 3 Dukes, Five Counts, around a hundred other lords and 3069 knights or squires. Additionally, were over 2500 bodies for whom there was no means of identifying the corpse.