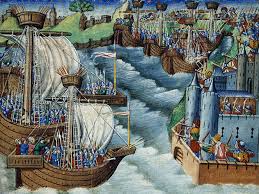 Planning for The War at Sea, an English Perspective

Planning of the naval aspect of the conflicts between England and France was critical if the English were to be successful on the continent. On the most basic level, the wars were caused by disputes over Aquitaine. The Duchy was large, wealthy, had a highly populated and well established trading centre in Bordeaux. And it, like England, relied on the sea for its wealth.

Trade between England and Aquitaine was vital to the treasury in both London and Bordeaux. To protect that trade in times of peace required thought. In times of war, it required careful planning, and a clear strategy. As the conflict developed, the English acquired Calais, and set about turning the port into a formidable base. Brittany too was, at times, held by English forces, with holding Breton ports being cited as being of importance.

Despite having, at times, well established and fortified positions at Calais, Brest, Bordeaux, and within Normandy, the seas were only safe for English ships if there was dominance of the Channel and Bay of Biscay.

A French source, thought to have been penned by Charles, Duke of Orléans in 1405, summed up the maritime situation succinctly:

From the ‘Debate between the heralds of France and England’

…The case is this. I say that a prince who intends to become king of the sea must, of necessity, have three things: first, deep and secure harbours for the security of his ships; secondly, he must have abundance of great and swift ships; thirdly, he must have merchandise in his country with which he may employ his ships. These three things are so necessary, that one of them without the others if of no avail…

Over the course of the Hundred Years War, these three necessities were strained at times. Success depended partly upon structural planning of the defence of ports, the acquisition and holding of continental deep water ports by the English, required the ability to construct ships of adequate size, strength, and speed, and necessitated ongoing seaborne, safe, trade.

The duke may not have been entirely accurate on the speed of vessels. Tactical nous, guile, and good fortune, all contributed to some sea battles being won by fleets made up of slower ships: Sluys is the primary example of this, with the effectiveness of fast moving galleys being eradicated by the success of the battle strategy, the battle of Winchelsea too saw the faster ships on the losing side. Speed and a low draft were, however, the reason that the French, with the assistance of Castillian galleys, gained the upper hand at times, particularly after their victory at La Rochelle and in the raiding campaigns of the 1370s.

2 thoughts on “Naval Planning in the Hundred Years War. Part One, an introduction to English considerations”