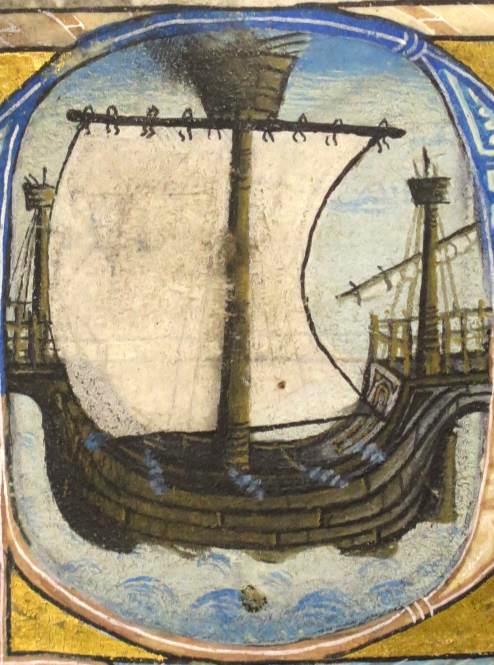 Deep water ports that were safe were also a priority for the English on the continent. At the outset of war, the only port of considerable worth that was in English hands on the continent was Bordeaux. Taking the war to the French, with the assistance of allies, was to be initially done in the north though. This meant ensuring access to ports close to Brabant and Hainault, an issue that led to the Battle of Sluys in 1340.

The campaign of 1346 expended much time and effort laying siege to Calais. Its value as a staging post, safe haven for ships, and centre of commerce that was accessible to merchants to the north of France was of the utmost importance. Taking the port, holding it, and being able to utilise it for international trade, were critical to campaigns throughout the Hundred Years War, and afterwards.

Importance of Calais to England in the Hundred Years War

The importance of Calais is evident through expenditure on the fortifications and garrisoning of the fortified port. David Grummitt in his book The Calais Garrison: War and Military Service in England, 1436-1558 cites a variety of figures for the period of the Hundred Years War:

The opportunity to take advantage of the War of Breton Succession was one that strategically made sense. Edward III wrote to the Black Prince of the merits of gaining English dominance in the area, and of holding Breton ports:

“…the Lord of Loyat, the Lord of Machecoul, the Lord of Retz, and the Lord of Rieux, as well as other knights in the said country [Poitou] and their towns and fortresses, which are directly on the borders of France and our Duchy of Gascony, have entered the peace: which is being held to be a great success for our war… we have laid siege to the town of Vannes, which is the best town in Brittany after the town of Nantes… And also, the said town is on the sea and is well walled, so that, if we take it, it will be a great advantage to our war…” Edward IIIs dispatch to Prince Edward, the Black Prince on the 1342 Brittany Campaign. Robert of Avebury, De Gestis mirabilibus regis Edwardi Tertii

Henry V and the seizure of Harfleur

The same thoughts no doubt applied to the use of Brest. Later in the wars, the seizing of good ports was a priority for Henry V as he set about the conquest of Normandy. Capturing Harfleur was of importance, given its location at the mouth of the Seine, but the campaign itself saw one force drive along the coast to secure each of the ports of Normandy, whilst Henry’s main force tackled the inland conquest.

…The case is this. I say that a prince who intends to become king of the sea must, of necessity, have three things: first, deep and secure harbours for the security of his ships; secondly, he must have abundance of great and swift ships; thirdly, he must have merchandise in his country with which he may employ his ships. These three things are so necessary, that one of them without the others if of no avail…

The importance of these deep water ports was clear to both sides. As the Duke of Orléans suggests, controlling deep water ports was a necessary part of being king of the sea. The French did not yield easily. English histories and popular perceptions often focus on the victory at Agincourt, the successes in the field whilst conquering Normandy, and the Treaty of Troyes. Overlooked, is the French counterattack at sea. The military commanders knew that English control of major ports on a long term basis would present France with huge difficulties. So, from their remaining ports in Picardy, they launched numerous raids on the English south coast to harass supply lines. Then, they lay siege to the port of Harfleur by means of a naval blockade.

It led to a series of indentures being issued for the urgent assembly of an English fleet to relieve Harfleur. This fleet was ordered to assemble at Southampton. The French and their Genoese allies identified this probability and simply blockaded the entrances to both Southampton and Portsmouth with Carracks and Galleys. England now faced the problem of having no use of their primary ports in the Solent, or their preferred port of choice in Normandy. It was a situation that dragged on from May until August, when the duke of Bedford was finally able to set sail with part of the fleet.

Battle of the Seine

The Battle of the Seine that followed in the waters outside Harfleur is described in the Chronicle, the Deeds of Henry V:

“the two fleets…had drawn close to one another in the mouth of the river Seine and then having grappled, had come to grips, and…following an exchange of missiles, iron gads [sharpened spears], stones and other weapons of offence, the fury of the combatants had reached boiling point”

The expense of this action shows how determined both sides were to have control of the major channel ports. It was a scenario that continued to dominate English planning until the fall of Normandy, as the ports in Normandy were permanently garrisoned: though investment, and payment of wages on time, declined during the fiscal crisis endured during the 1440s.

In text Image: A bundle of indented contracts and warrants with masters of various ships and army retinue leaders serving in the summer of 1416 outlining length of service and payment of wages (catalogue reference: E 101/48/10) [https://blog.nationalarchives.gov.uk/battle-seine-henry-vs-unknown-naval-triumph/]

Naval Planning in the Hundred Years War. Part One, an introduction to English considerations

One thought on “English Port’s on the Continent. Naval Planning, Part Three”