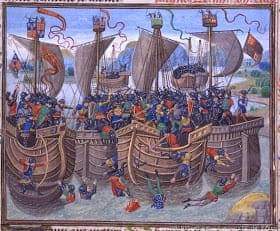 The English determined their naval strategy for their forthcoming campaign in the Hundred Years War on 23rd January 1340. It was a strategy based on assumptions. The preparations paved the way for the naval clash at Sluys later in the year.

On 23rd January 1340 the Royal Council met with shipmasters from English ports. The meeting was called to assess the availability of large ships (100 tonnes or above); to identify the main areas of need; to analyse probable French strategy and, to determine whether it was necessary to source vessels from other nations.

The meeting took place alongside the sitting of Parliament. Rather unusually, the meetings decisions were ratified by the Parliament: making the military strategy rather public!

The Council was of the opinion that the French would concentrate their efforts on raiding the South Coast of England. Having no ports in the Low Countries, they could not mount attacks in the north. The Council did not think that the French would risk their navy in a sea battle aimed at preventing the English army being transported across the Channel.

The basis of thinking that this would be French strategy was their numbers. Hired Italian ships and sailors had left Northern France in late 1339. This left a French fleet of 22 Royal Galleys: many of which were sunk in a raid by the English on Bologne (I can’t find the date of that raid, just ‘early 1340’, anyone know that date?)

The ship masters agreed to supply the crown with ships for the campaign. 70 from the West Country, 20 from the Cinque Ports and 9 from London.

At a later date an Ambassador was sent to try and hire Venetian or Genoese Galleys. Whether this was a serious attempt or designed to hinder French plans to do the same is a little unclear.

The basis of a fleet for the summer campaign was in place, albeit with promises that exaggerated the ability of some ports to supply large vessels. Both sides supplemented these fleets with smaller vessels in the summer campaign. The French strategy was not to raid the South Coast as anticipated but instead they blockaded Flemish ports, to prevent the English having a point of disembarkation. This resulted in the naval engagement, the Battle of Sluys.