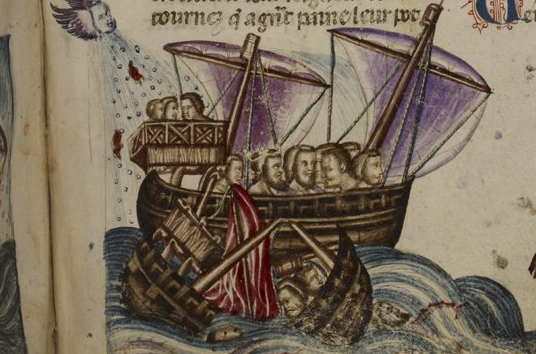 English planning for naval superiority in the Hundred Years War

The English navy was on the whole not owned by the crown. The typical method of creating a fleet was through the requisitioning of English merchant vessels. This practice was well established but had not been used on the same scale as was to happen in this Anglo-French conflict.

The method was, in theory, quite simple. Orders would be sent to ports for a specified number of ships to be sent to the King and his Councils chosen port of embarkation. The ships would typically be the larger merchant vessels which would be capable of carrying large numbers of men, horses, weapons, or supplies. Modifications would be made to many of these vessels for a military campaign.

Though the intention was usually to merely transport an army, the possibility of a sea battle meant that they needed fortifying. This was done through creating ‘castles’ from which archers and crossbowmen could unleash arrows and bolts, and modifications may be required to enable men-at-arms to exit the ship to board an enemy with greater ease. Some vessels carried guns, cannon being used at sea from the early stages of the wars and handheld guns also being a possibility by this time.

The ships captains would, usually, be compensated for the time that they had been ‘arrested’ for, which would cover their loss of income from mercantile voyages. Ensuring that these payments were made on time was important to ensure the continued support of England’s ports and ship owners. The crown also had some warships, the number of which fluctuated throughout the conflict. At all times in the Hundred Years War, the bulk of shipping was provided by merchants.

Organising these fleets was logistically difficult. To ensure that it ran as smoothly as possible, King Edward III chose to summon representatives from each of the major ports to advise himself and his council on maritime matters:

“King Edward III to the authorities of Great Yarmouth, 6 February 1344

We order you to choose four of the most intelligent men of your town, best informed about the state of shipping of our kingdom of England, and send them to London to arrive without fail on the Monday after Quadragesima Sunday [23 February], in order that we and our Council may be informed about maritime affairs, and enabled, God willing, to do whatever is necessary about them”.

A similar letter was sent to forty-four other ports, with a total of sixty-nine experts being summoned to attend Council for the purpose of discussing maritime matters.

Such a summons shows the importance of the merchant fleet to the King and his Council. The ports, and those summoned were from all the principal ports of the East, South and South West’s coastline, were the source of the King’s navy. With very few vessels being owned by the crown itself: just three warships in 1340 when the French were engaged and defeated at Sluys, the ‘arrest’ of merchant ships was vital. And that needed cooperation from the ports, resulting in the planning of maritime operations having to consider the needs and livelihoods of the English ship owners who operated large merchant vessels.

When this worked well, as it did when all ports were consulted and listened to, England could muster several fleets. This occurred in the 1350s when Fleets were assembled that were intended to deliver three armies to Calais, the Cotentin Peninsular, and to Bordeaux. If, however, there were delays, poor organisation, or overdue payment to the ship owners, the consequences could be problematic for the military strategists. The King and his campaign organisers were very aware of the potential pitfalls of poor planning. It did not mean that problems were always avoided. In 1371 the Commons petitioned about the dire state of the navy:

The Commons ask the King to understand the principal causes by which the navy has been almost destroyed:

Firstly, because ships have often been arrested long before the King had a use for them, during which time the owners have been at the expense of keeping both the ships and the seamen with no opportunity of earning anything. By this many of them are so impoverished that they can no longer keep up with their business, and their ships decay and rot.

Moreover, the merchants in whom the navy depends have been hindered in their travels on business by various orders, which have deprived shipping of freight, driven a large part of the seamen to earn their living in other trades, and left the ships beached to rot.

Furthermore, whenever they are ready for a voyage, the masters of the King’s ships have used their authority to take the masters and best men of other ships to serve with them. This has left the ships out of control, by which several have been lost, and those who should have been in command have been annihilated.

Answer: The King will consult with his Council how to restore the situation.”

The problems illustrated above led at times for the relationship between the crown and the ship owners to be strained. When this happened, ships captains sometimes simply chose to operate from overseas ports, to avoid being requisitioned. On other occasions ships simply deserted part way through their intended period of service. This led to occasions where requisitioning was forced, at least once without pay, and on other occasions, messages were dispatched to agents on the continent to encourage ships to return. One such example of that taking place was during the preparations for Edward IIIs 1360 campaign:

On March 19th, orders were issued regarding the fleet. From the Close Rolls:

“To John Malewayn, governor of the liberties of merchants of England at Brugges in Flanders. Commission and order, on sight of these presents, under pain of forfeiture, to cause all ships of England, great and small, which he may find in Flanders, to be arrested, and to charge the masters thereof on pain of forfeiture to hasten to the port of Sandewich, there to embark men at arms, armed men and archers appointed to sail therein and there awaiting them, and in case the shipmasters coming thither shall hear that the king’s fleet has sailed, they shall draw towards the same to sail with it against his enemies; also by imprisonment and otherwise to compel the said shipmasters to find security for so doing, and to certify the king in chancery under seal of their names and of the names and number of their ships; as it is ordered by the king and council that all ships of the northern and western parts shall speedily sail to oppose the king’s enemies of France, who have newly invaded the realm, and hereupon the citizens of London of their own free will have granted that they will find a great number of men at arms, armed men and archers to sail immediately with 20 ships in their port and in the Thames to inflict what damage they can, and the king has learned that many ships of England are in Flanders. By the guardian and C.”