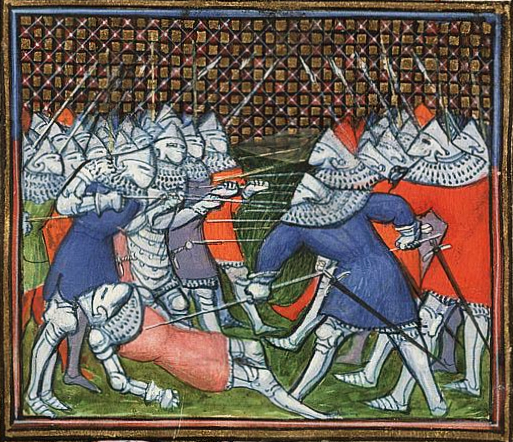 Sir John Chandos’ life in many ways mirrors the ambitions and successes of the English, in France. From a noble family who traced their rank and title to their participation in the invasion of William of Normandy, Chandos was heavily involved in the early phases of the Hundred Years War.

Sir John Chandos: Chivalry and founding Knight of the Garter

Chandos is remembered as one of the founding Knights of the Garter. He embodied many of the qualities expected of a man in and around court in this, the age of chivalry. Froissart’s Chronicles note his chivalric values:

‘There was nobody in them but two fair damosels, daughters to the lord of Poix; they were soon taken, and had been violated, an two English knights had not been, sir John Chandos and sir Basset; they defended them and brought them to the king, who for his honour made them good cheer and demanded of them whither they would fainest go[i]’

And Froissart iterates the closeness of Chandos to the Black Prince, of whose household he was a leading member:

lord Chandos said to the prince: ‘Sir, take your horse and ride forth; this journey is yours: God is this day in your hands: get us to the French king’s battle, for their lieth all the sore of the matter. I think verily by his valiantness he will not fly: I trust we shall have him by the grace of God and Saint George, so he be well fought withal: and, sir, I heard you say that this day I should see you a good knight.’ The prince said, ‘Let us go forth; ye shall not see me this day return back,’ and said, ‘Advance, banner, in the name of God and of Saint George.’

Of course, Froissart romanticises matters in his chronicle, but the Knights of the Garter did hold Chivalric values dearly, and other evidence shows that Chandos was close enough to the Black Prince to have had such advisory conversations with the heir to the throne. It was through comradeship with Prince Edward, that Chandos had risen. Like the Prince, he had been a relatively young man as King Edward III made the decisions that led to the outbreak of war with France.

Chandos and the early campaigns of the Hundred Years War

And Chandos was soon involved. At the Siege of Cambrai in 1339 he engaged in a single combat worthy of being entered into the written record. He ‘won his spurs’ and was knighted in the same year. In 1340 Chandos was among the men who tackled the Franco-Genoese Fleet in the daring but successful naval assault at Sluys.

His role at the heart of the conflict continued with his presence on the Crecy Campaign, seeing him fighting in the vanguard at the Battle. Another sea battle followed, that of Winchelsea, before he joined the Black Prince in his expedition to Aquitaine. On that campaign, Chandos is reported, by Froissart, to have encountered the sieur de Clermont, who happened to have the same heraldic device as himself:

‘Chandos, how long have ye taken on you to bear my device?’ ‘Nay, ye bear mine,’ said Chandos, ‘for it is as well mine as yours.’ ‘I deny that,’ said Clermont, ‘but an it were not for the truce this day between us, I should make it good on you incontinent that ye have no right to bear my device.’ ‘Ah, sir,’ said Chandos, ‘ye shall find me to-morrow ready to defend you and to prove by feat of arms that it is as well mine as yours.’ Then Clermont said: ‘Chandos, these be well the words of you Englishmen, for ye can devise nothing of new, but all that ye see is good and fair.[ii]‘

Chandos was one of the Black Prince’s commanders in Aquitaine, having oversight of the scouting network. His role was such that he received the second highest individual reward as a result of the victory at the Battle of Poitiers: 600 crowns, an annuity of £40 and two English manors.

He was once again on campaign in 1357, leading raids on the besieged City of Rheims and acting as one of the negotiators for truces with the French. His camaraderie with and loyalty to the Black Prince then saw his deployment to Aquitaine following the Treaty of Brétigny.

The Principality of Aquitaine

Here the task was to establish systems prior to the Ducal take-over and the creation of the Principality, under the Black Prince. Aquitaine was not as easy an area to govern as you may imagine. Bordeaux is famed for its pro-English attitude, fuelled by the wealth that trade in Wine to the ports of England generated. Inland, the situation was rather less supportive.

With the Black Prince installed as ruler of Aquitaine, Chandos was appointed as his constable. He had command of the garrison at La Rochelle. In this capacity he, in 1364, led an army north to the aid of the pro-English Duke of Brittany, John de Montford. In the clashes against the French, the invading Charles Duke of Blois was killed. Chandos also oversaw the capture of one of France’s greatest commanders, Bertrand du Guesclin. This was a high-value prisoner, the ransom, which was paid to Chandos, was said to be 100,000 Francs (We know that the King of France contributed 20,000 and letters show commitments from the Pope and leading nobles to make up the remainder)[iii].

Chandos was also constable of the Black Prince’s army when it travelled to Castile to support the claim of Pedro the Cruel’s attempt to retake the throne. On this campaign, Chandos fought under his own banner. As a banneret and commander in his own right, rather than as one of the Prince’s retinue. Nonetheless, at the battle of Nájera in April 1367 he fought alongside the Prince in the vanguard.

The death of Sir John Chandos

Upon returning to Aquitaine, Chandos engaged in raiding the lands of the Duke of Anjou. In a mopping up exercise at Lussac-les-Châteaux, he and just 40 of his men defeated a French force. However, in the melee Chandos had slipped on his cloak. A French squire stabbed him in the face. Chandos was taken to a nearby castle but died of his wound within the next day or so. His date of death is recorded as the 1st January 1369/70, depending upon which dating system you wish to follow: the Medieval Year changed in March, not on 1st January.

The following epitaph was inscribed above the tomb of Sit John Chandos: