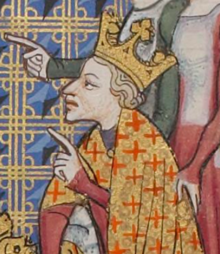 Charles was born in Évreau on 10th October 1322. He was the eldest son of Philip of Évreux, and Joan II of Navarre. His father was a cousin of King Philip VI, his mother was the only daughter of King Louis X of Navarre. This meant that as an adult, he inherited lands in both France and the throne of Navarre, making him a very wealthy and influential man.

His adult life was notable for his attempts to maximise that influence, particularly in France. He married the King of France’s daughter and became influential at court in Paris. Charles soon became embroiled in arguments and diplomatic ploys to better his standing. In the early 1350s he tried to regain Angouléme from the Constable of France, Charles de la Cerda. The lands had been taken from Charles’ mother in return for cash compensation. The King of France had then granted these lands to the Constable. It was a reasonably common practice, but Charles was frustrated at the relatively small payment received. It led to arguments and then, in January 1354, the assassination of Charles de la Cerda.

The assassination led to Charles of Navarre opening talks with the English about an alliance against John II of France. This was at a time when the threat of renewed English campaigns was high. It led to King John II opting to appease the King of Navarre, with Charles receiving lands through the Treaty of Mantes and, after another threat of allying with England, through the Treaty of Valognes.

Charles’ political methods won him few friends in the French court. His actions threatened the preparations for the likely campaigns with England and the assassination of de la Cerda had angered many. In April 1356 as France prepared for war, Charles and his supporters were taken by surprise at the Dauphin’s castle in Rouen. The King’s men seized Charles and a number of his closest supporters. The King of Navarre was imprisoned, his friends beheaded and their remains left in gibbets.

Captivity and Escape from Gaol

Charles was in captivity as the French suffered the defeat at Poitiers. He was sprung from his gaol as France began to face the realities of their predicament. Though a villain to many in court, Charles was very popular with the commons. He used this to his advantage. Under the leadership of Etienné Marcel, Paris was rising against the Dauphin. Charles fuelled this, forcing the Dauphin out of Paris at just the same time as news arrived from England that the Kings of England and France had agreed terms.

Charles II of Navarre and the Jacquerie

As the Jacquerie threatened French Government, Charles decided to manipulate the situation once more. Though he had encouraged the revolt, he now saw that he could win favour with courtiers and retain the support of the commons of Paris. He turned on the peasants who were in revolt around the capital.

The resultant Battle of Mello crushed the revolt but failed spectacularly to achieve Charles’ overall goals. His supporters in Paris agitated for him to be appointed as ‘Captain of Paris’, a move viewed with dismay by the nobility who saw this as a threat to their position. It culminated in Charles being forced by the Parisians to lead a force against his own men, during which he led the mob into an English ambush.

Despite the strange events in and around Paris and the disdain of much of the nobility, Charles remained an important figure. With the threat of another English invasion looming once again in 1359, he agreed terms with the Dauphin. This resulted in the Navarrese king being pardoned as England and France agreed terms in the Treaty of Bretigny.

The peace terms between France and England did not bring an end to the disputes that Charles was involved in. Upon the death of the Duke of Burgundy, Charles attempted to claim the Duchy as his own. When he failed to gain support for his claim, he travelled to Navarre and began plotting his net move. His plan was to expand his lands in Normandy through force, sending an army by sea and working with the Great Company to force France into a war on two fronts.

The plan failed, with his brother changing the agreed strategy in Normandy and the Great Company achieving little. By May 1365, Charles had gained nothing and lost sympathy from many earlier supporters and the church.

As his campaigns in France came to an end, Charles turned his attention to the growing conflict among the Spanish Kingdoms, of which Navarre was one. He allied with Peter of Castile but then made agreements for the Free Companies to march through his territories to attack his ally. Further to this he then met with the Black Prince and made promises to the English and Pedro the Cruel. He then visited Henry of Trastamara, on the other side of the conflict, and promised him the exact opposite. It was a strange situation that became even odder. Charles clearly couldn’t fight in a conflict in which he had made important promises to both sides. So, he planned for himself to be kidnapped in an ambush: a solution that duped nobody.

Even after this, Charles tried to play off the English and French. He wanted to regain lands in Normandy and so in 1370 agreed terms with Edward III whilst also negotiating with Charles V of France. Events not involving his own men resulted in his attempts to manipulate the situation failing, the English were defeated at the Battle of Pontvallain, Charles was left with no leverage and so agreed terms and paid homage to the King of France.

This was not the end of Charles’ attempts to influence matters. He began using marriage contracts for his children as a means of winning support. One was the ill-fated contract for his heir to marry Leondra of Portugal, which resulted in the latter losing her inheritance as the Portuguese staged a coup to prevent Navarrese lordship.

Again, he made overtures to England. First, through use of his Spanish lands in John of Gaunts campaigns in Castile, Second through offering use of ‘his’ ports in Normandy.

His plots came to an unsuccessful end in 1378/9. The English seized Cherbourg for themselves, instead of simply reenforcing Charles’ men. His son joined forces with the Duke of Burgundy, fighting in the French army. Even in Navarre he was unsuccessful, being forced into handing over 20 castles and having terms imposed on him by the French and Castilians.

His influence had come to an end. His final years were politically impotent, and his health gradually failed. In 1387, he came to a horrific end. His doctors had ordered that he was to be kept warm by wrapping Charles in linen that had been steeped in wine and the bed warmed by pans of hot coals. Both were reasonably common treatments, and it kept the King comfortable for quite some time. Then, an accident saw a candle light these alcohol steeped linens. According to Froissart,

“by the pleasure of God, or of the devil, the fire caught to his sheets, and from that to his person, swathed as it was in matter highly inflammable.”

One thought on “Charles II of Navarre”