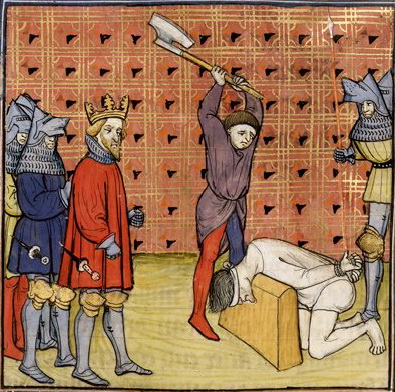 In late May 1358 a mob assaulted the village of Saint-Leu d’Esserent, killing several supporters of the Duke of Normandy. It was the first incident in what escalated into one of France’s largest rebellions, that of the Jacquerie. It spread quickly through the Beauvais region, seeing large groups of initially uncoordinated men attacking lords and destroying buildings.

The uprising seems to have been borne out of fear and frustration. The Beauvais area itself had not been ravaged by war, but had become an area of logistical importance with tax rises accompanying this. Soon the angry peasantry had a leader. Guillaime Cale, from the village of Mello, became the self-proclaimed ‘Captain of the Beauvasisis’.

Within days, Cale had a force of thousands at his command. And it was not just poor agricultural labourers. It included men who had held commands for nobles and people who were wealthy enough to later buy themselves a pardon. Some towns and villages joined in the destruction of buildings, several castles being seized and destroyed. Soon, the uprising had spread to the outskirts of Paris.

Oddly, the rebels gave the authorities an idea. It was clear that some of the destruction was motivated through fear of having fortifications fall into the hands of the English. So, when the rebels made contact with the Paris authorities, the response was to encourage the destruction of castles in the approaches to Paris from the north.

The Jacquerie rebellion soon spread to the South of Paris, with similar destruction beginning to take place. The government was still in some disarray and the rebellion was not being addressed head on. The Dauphin was close, but planning his own assault on Paris, so he and his men ignored the Jaquerie. The nobility then turned to Charles of Navarre for leadership.

Charles of Navarre was an astute politician. He saw the gains to be made to his own position that could be made through an intervention. He gathered a small army. As the Jacquerie began to disperse into smaller groups, he advanced on Mello, where Cale and a force had camped.
On 8th June Guillaime Cale prepared his defences. His men formed up and readied themselves. No attack was forthcoming though. They waited, then, on 10th June, Cale was invited to parley with Charles of Navarre. He crossed to negotiate with the Navarese king. As soon as he was at Charles’ camp, Cale was seized. Charles of Navarre’s army then assaulted the rebel camp.

The cavalry charge into the rebel lines was devastating. The rebels had lost their leadership, and soon lost their discipline. They were soon cut down and many of the Jacquerie were killed. Once the brief and decisive battle was finished, Guillaime Cale was beheaded.
The Southern uprising of the Jacquerie saw a large crowd descend upon Meuse. This mob readied itself to enter the city. Unknown to them was that the Castle at Meuse had many more professional soldiers in it than was usual. A force of crusaders was staying there. The Marché also had the Dauphin’s wife and his son present. There would be no quarter given in ensuring their safety. On 9th June, the men-at-arms of the Marché undertook a cavalry charge at the mob.

The mob was chased back into the suburbs where the cavalrymen killed or captured them. To crush the rebellion once and for all, they then systematically torched houses in the suburb, burning it to the ground and leaving no sheltering place for the mob.
Over 2 days both of the main bodies of rebels were put to the sword and the Jacquerie rebellion brought to an end.

Certain people of the common villages, without any head or ruler, assembled together in Beauvoisin. In the beginning they passed not a hundred in number they said how the noblemen of the realm of France, knights and squires, shamed the realm, and that it should be a great wealth to destroy them all: and each of them said it was true, and said all with one voice: “Shame have he that cloth not his power to destroy all the gentlemen of the realm!”

Thus they gathered together without any other counsel, and without any armour saving with staves and knives, and so went to the house of a knight dwelling thereby, and brake up his house and slew the knight and the lady and all his children great and small and brent his house. … And so they did to divers other castles and good houses; and they multiplied so that they were a six thousand, and ever as they went forward they increased, for such like as they were fell ever to them, so that every gentleman fled from them and took their wives and children with them, and fled ten or twenty leagues off to be in surety, and left their house void and their goods therein. These mischievous people thus assembled without captain or armour robbed, brent and slew all gentlemen that they could lay hands on, and forced and ravished ladies and damosels, and did such shameful deeds that no human creature ought to think on any such, and he that did most mischief was most praised with them and greatest master. I dare not write the horrible deeds that they did to ladies and damosels; among other they slew a knight and after did put him on a broach and roasted him at the fire in the sight of the lady his wife and his children; and after the lady had been enforced and ravished with a ten or twelve, they made her perforce to eat of her husband and after made her to die an evil death and all her children.

Writing of the Jacquerie Uprising, the chronicler Jean le Bel noted the brutaility of the revolt:

Peasants killed a knight, put him on a spit, and roasted him with his wife and children looking on. After ten or twelve of them raped the lady, they wished to force feed them the roasted flesh of their father and husband and made them then die by a miserable death.

One thought on “Battle of Mello”