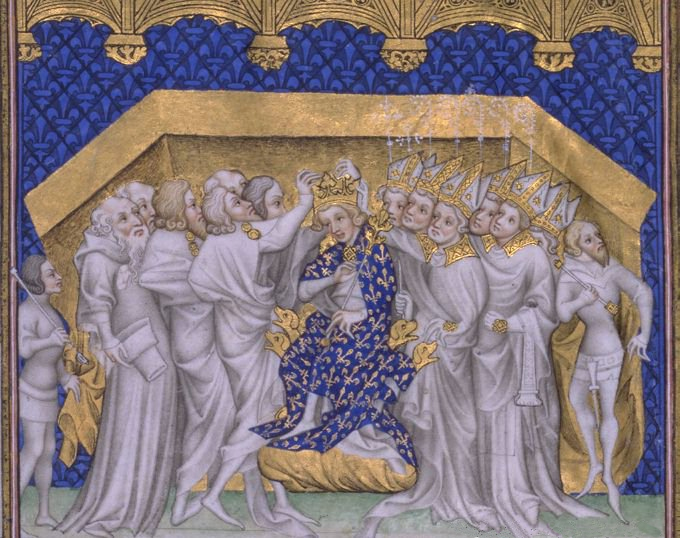 The Coronation of King Charles VI of France took place in Rheims on 4th November 1380. Coronation ceremonies are full of symbolism, mystery and grandiose shows for public consumption. In Medieval France, this included holy legends and the anointment of the King. At coronation ceremonies there would often be a number of knighthoods or higher honours bestowed, gifts lavished, feasts held for the nobility and, sometimes, conduits of wine provided throughout the city in which the coronation was taking place. King Charles VI was crowned at Rheims, as was usual for the Kings of France. It was in Rheims that legend had it that St. Remy had anointed Clovis, and that same oil was used to link the new monarch with god.

Charles VIs coronation is well documented. A lengthy description of it is included in the Chronicles of Jean Froissart:

“…his uncles of Anjou, Berry, Burgundy and Bourbon, were present; as were his great uncles…

The young king made his entry into the city of Rheims on the Saturday, handsomely attended by the great lords, nobility and minstrels, at vespers. In particular, there were upwards of thirty trumpers, which preceded him, and sounded so clear it was quite marvellous to hear them. The young king of France dismounted before the church of our Lady at Rheims, in the company of his uncles and brother. There were also his cousins of Navarre, d’Albret, of Bar and of Harcourt and a great many other young squires…

…All of the youths desirous of knighthood attended him, and did the same. On the Sunday, which was All-saints day, the church of our Lady was very richly decorated for the coronation; so much so that it could not possibly have been better ordered.

The bishop of Rheims, after having said mass with great solemnity, conscecrated the king with the holy ampulla with which St. Remy had anointed Clovis, the first Christian king of the French. This sacred oil was sent by God by a holy angel, with which the kings of the French have ever since been anointed, and it never diminishes. Now this must be considered as wonderfully miraculous.

Before the conscecration, the king created, in front of the altar, all those young squires knights: the office of mass was afterwards chaunted by the archbishop, the king being clothed in his royal robes, and seated on an elevated throne, adorned with cloth of gold and all the young knights were placed on low benches, covered also with the same, at his feet. In this state they did remain the whole day. The new constable, Sir Oliver de Clisson, was present: he had been named constable a few days prior to this ceremony, and performed well his charge and everything belonging to it. The principal barons of France were also there so richly dressed it would be tedious to relate: the king was seated in a royal majesty with a crown on his head so rich and precious beyond measure. The church of our Lady at Rheims was so much crowded during this ceremony that one could not turn one’s foot. I have heard also. That at this accession of the young king to the throne, in order to please the people of France, all impositions, aids, taxes, subsidies and other levies, which have displeased and much oppressed them, were abolished, greatly to the joy of the subjects.

After mass, they went to the palace; but, as the hall was far too small for such numbers, they erected in the court of the palace a large covered stage, on which the dinner was served. The king was seated with his five uncles… but, though they were at his table, they were at a distance from him. The archbishop of Rheims and other prelates were on his right hand. He was served by the great barons, the lord de Coucy, the lord de Clisson, Sir Guy de la Tremouille, the lord high admiral and several others, on handsome horses, covered and decorated with gold brocade. The whole day passed in ceremonies. On the morrow, many of the great barons took leave of the king and his uncles and returned to their own country, The king went that day to dinner at the abbey of St. Thierry, two leagues from Rheims, for those monks are bound to give him this entertainment, and the city of Rheims to provide for the coronation of the king. Thus ended this noble feast. He returned to Paris, where he was grandly feastedby the Parisians at his entrance.” Froissart

One thought on “Coronation of King Charles VI of France”