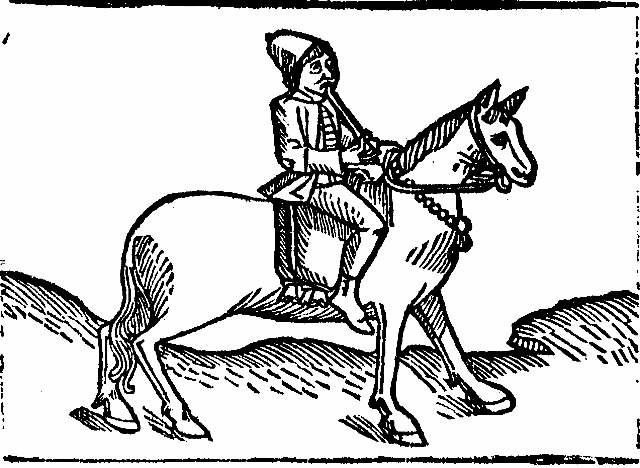 When folk had laughed their fill at this nice pass
Of Absalom and clever Nicholas,
Then divers folk diversely had their say;
And most of them were well amused and gay,
Nor at this tale did I see one man grieve,
Save it were only old Oswald the reeve,
Because he was a carpenter by craft.
A little anger in his heart was left,
And he began to grouse and blame a bit.
“S’ help me,” said he, “full well could I be quit
With blearing of a haughty miller’s eye,
If I but chose to speak of ribaldry.
But I am old; I will not play, for age;
Grass time is done, my fodder is rummage,
This white top advertises my old years,
My heart, too, is as mouldy as my hairs,
Unless I fare like medlar, all perverse.
For that fruit’s never ripe until it’s worse,
And falls among the refuse or in straw.
We ancient men, I fear, obey this law:
Until we’re rotten, we cannot be ripe;
We dance, indeed, the while the world will pipe.
liesire sticks in our nature like a nail
To have, if hoary head, a verdant tail,
As has the leek; for though our strength be gone,
Our wish is yet for folly till life’s done.
For when we may not act, then will we speak;
Yet in our ashes is there fire to reek
“Four embers have we, which I shall confess:
Boasting and lying, anger, covetousness;
These four remaining sparks belong to eld.
Our ancient limbs may well be hard to wield,
But lust will never fail us, that is truth.
And yet I have had always a colt’s tooth,
As many years as now are past and done
Since first my tap of life began to run.
For certainly, when I was born, I know
Death turned my tap of life and let it flow;
And ever since that day the tap has run
Till nearly empty now is all the tun.
The stream of life now drips upon the chime;
The silly tongue may well ring out the time
Of wretchedness that passed so long before;
For oldsters, save for dotage, there’s no more.”
Now when our host had heard this sermoning,
Then did he speak as lordly as a king;
He said: “To what amounts, now, all this wit?
Why should we talk all day of holy writ?
The devil makes a steward for to preach,
And of a cobbler, a sailor or a leech.
Tell, forth your tale, and do not waste the time.
Here’s Deptford! And it is half way to prime.
There’s Greenwich town that many a scoundrel’s in;
It is high time your story should begin.”
“Now, sirs,” then said this Oswald called the reeve,
“I pray you all, now, that you will not grieve
Though I reply and somewhat twitch his cap;
It’s lawful to meet force with force, mayhap.
“This drunken miller has related here
How was beguiled and fooled a carpenter-
Perchance in scorn of me, for I am one.
So, by your leave, I’ll him requite anon;
All in his own boor’s language will I speak.
I only pray to God his neck may break.
For in my eye he well can see the mote,
But sees not in his own the beam, you’ll note.”
HERE ENDS THE PROLOGUE