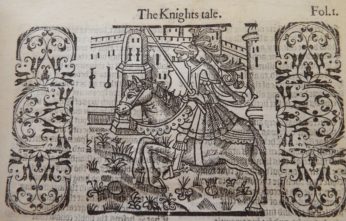 THE KNIGHT
A knight there was, and he a worthy man,
Who, from the moment that he first began
To ride about the world, loved chivalry,
Truth, honour, freedom and all courtesy.
Full worthy was he in his liege-lord’s war,
And therein had he ridden (none more far)
As well in Christendom as heathenesse,
And honoured everywhere for worthiness.
At Alexandria, he, when it was won;
Full oft the table’s roster he’d begun
Above all nations’ knights in Prussia.
In Latvia raided he, and Russia,
No christened man so oft of his degree.
In far Granada at the siege was he
Of Algeciras, and in Belmarie.
At Ayas was he and at Satalye
When they were won; and on the Middle Sea
At many a noble meeting chanced to be.
Of mortal battles he had fought fifteen,
And he’d fought for our faith at Tramissene
Three times in lists, and each time slain his foe.
This self-same worthy knight had been also
At one time with the lord of Palatye
Against another heathen in Turkey:
And always won he sovereign fame for prize.
Though so illustrious, he was very wise
And bore himself as meekly as a maid.
He never yet had any vileness said,
In all his life, to whatsoever wight.
He was a truly perfect, gentle knight.
But now, to tell you all of his array,
His steeds were good, but yet he was not gay.
Of simple fustian wore he a jupon
Sadly discoloured by his habergeon;
For he had lately come from his voyage
And now was going on this pilgrimage.