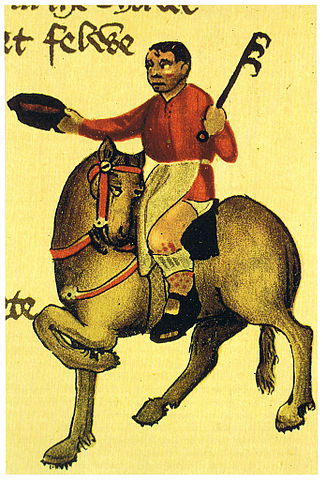 There lived a ‘prentice, once, in our city,
And of the craft of victuallers was he;
Happy he was as goldfinch in the glade,
Brown as a berry, short, and thickly made,
With black hair that he combed right prettily.
He could dance well, and that so jollily,
That he was nicknamed Perkin Reveller.
He was as full of love, I may aver,
As is a beehive full of honey sweet;
Well for the wench that with him chanced to meet.
At every bridal would he sing and hop,
Loving the tavern better than the shop.
When there was any festival in Cheap,
Out of the shop and thither would he leap,
And, till the whole procession he had seen,
And danced his fill, he’d not return again.
He gathered many fellows of his sort
To dance and sing and make all kinds of sport.
And they would have appointments for to meet
And play at dice in such, or such, a street.
For in the whole town was no apprentice
Who better knew the way to throw the dice
Than Perkin; and therefore he was right free
With money, when in chosen company.
His master found this out in business there;
For often-times he found the till was bare.
For certainly a revelling bond-boy
Who loves dice, wine, dancing, and girls of joy-
His master, in his shop, shall feel the effect,
Though no part have he in this said respect;
For theft and riot always comrades are,
And each alike he played on gay guitar.
Revels and truth, in one of low degree,
Do battle always, as all men may see.
This ‘prentice shared his master’s fair abode
Till he was nigh out of his ‘prenticehood,
Though he was checked and scolded early and late,
And sometimes led, for drinking, to Newgate;
But at the last his master did take thought,
Upon a day, when he his ledger sought,
On an old proverb wherein is found this word:
“Better take rotten apple from the hoard
Than let it lie to spoil the good ones there.”
So with a drunken servant should it fare;
It is less ill to let him go, apace,
Than ruin all the others in the place.
Therefore he freed and cast him loose to go
His own road unto future care and woe;
And thus this jolly ‘prentice had his leave.
Now let him riot all night long, or thieve.
But since there’s never thief without a buck
To help him waste his money and to suck
All he can steal or borrow by the way,
Anon he sent his bed and his array
To one he knew, a fellow of his sort,
Who loved the dice and revels and all sport,
And had a wife that kept, for countenance,
A shop, and whored to gain her sustenance.
OF THIS COOK’S TALE CHAUCER MADE NO MORE