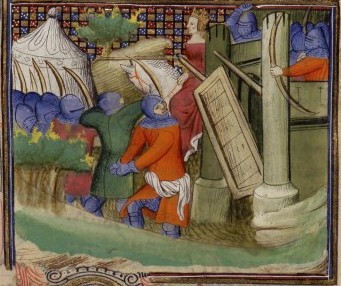 Joanna of Flanders was the daughter of Louis I, Count of Nevers and Joan, Countess of Rethel. Sister of Louis I, Count of Flanders, Joanna married John of Montfort in 1329. Though this was quite late for a noblewoman to marry, she was 29, she bore two children to John of Montfort, a son, John, who went on to become Duke of Brittany and a daughter, Joan, who became Baroness of Drayton. Her marriage placed her into a family that was at the heart of Breton politics. Her husband was a half-brother of John III, Duke of Brittany.

John of Montfort’s claim to the duchy of Brittany

It was her husbands position within the ruling family of Brittany that was to create the scenario for which Joanna has become famed. In 1341 Duke John III died childless. As the Duke’s half-brother, John of Montfort claimed the Duchy as his own. It was a claim that was challenged though. His niece, Joan of Penthièvre, was born from the first marriage of her grandfather, whereas John of Montfort was a son born of the second. It presented a question mark over who had the right of succession. Was it John, by virtue of him being the closest male relation, or could his niece inherit her father’s claim to the Duchy: her father being the predeceased brother of Duke John III.

French intervention on behalf of Charles of Blois

The matter saw both sides make a strong case and make preparations to take and hold the Duchy through force of arms. Joan of Penthièvre was married to Charles of Blois, a nephew of King Philip VI of France. This led to the French determining that the succession should go to Charles of Blois by right of his wife. John of Montfort had already taken control of the Ducal treasury, gained the support of the majority of the Breton nobles, and secured many of the Duchies castles and fortified towns. Charles of Blois had a fight on his hands to gain the Duchy, but was provided with military support by his uncle and John, duke of Normandy, brought an army to the aid of the Blois cause.

Soon, John of Montfort’s grip on Brittany was in dire straights. On 21st November 1341, less than six months after he had claimed the Ducal title, John was captured by French soldiers as the town of Nantes fell to Charles of Blois army. He was taken to Paris where he was held as a prisoner in the Louvre.

With her husband in captivity, it would have been easy for Joanna of Flanders to seek terms with Charles of Blois, or directly with Joan of Penthièvre. She didn’t. Instead, she made it known that her infant son was now the head of the Montfort cause. Far from giving in, Joanna was going to fight for her rights.

Joanna of Flanders takes to arms

Joanna then gathered loyal followers and marched on Redon, capturing it. Anticipating that the main army of Charles of Blois would now move on the next major fortress, Joanna then made for the town Hennebont, which she and her army set about preparing to withstand the expected siege. When Charles of Blois arrived before the town, Joanna was ready. As the siege progressed she sent Amaury de Clisson to England to urgently request aid from Edward III: who was happy to oblige.

When the valiant lady and her supporters heard that Lord Charles was coming to besiege them, they gave order for all their troops to arm and for the great bell to be rung to summon everyone to the city’ defence. This was done without demur. And when Lord Charles and the French lords drew near and saw the city’s strength they ordered their men to make camp in positions for a siege. Some of the young Genoese and Spanish fellows – French, too – went to skirmish at the the barriers; and there were a number of fierce clashes in which the Genoese, through their recklessness, lost more than they gained. When evening drew in everyone returned to quarters.

The defence of Hennebont was led by Joanna of Flanders herself. Donning armour, she is said to have not only rallied men on the walls and barriers but participated in the fighting herself. This is supported by Jean le Bel’s account of Joanna leading an attack on an an ill-prepared part of the besiegers camp.

And now you shall hear of the boldest and the most remarkable feat ever performed by a woman. Know this: the valiant countess, who kept climbing the towers to see how the defence was progressing, saw that all the besiegers had left their quarters and gone forward to watch the assault. She conceived a fine plan. She remounted her charger, fully armed as she was, and called upon some three hundred men-at-arms who were guarding a gate that wasn’t under attack to mount with her; then she rode out with this company and charged boldly into the enemy camp, which was devoid of anyone but a few boys and servants. They killed them all and set fire to everything: soon the whole encampment was ablaze.

When the French lords saw their camp on fire and heard the shouting and commotion, the assault was abandoned as they rushed back in alarm, crying: “Treachery! Treachery!” The valiant countess, seeing them alerted and the besiegers streaming back from all sides, rallied her men and, realising there was no way back to the town without grave loss, rode off in another direction, straight to the castle of Brayt, some four leagues away.

Joanna of Flanders and her men had struck the French force hard. But now they found themselves isolated and unable to reach the gate through which they had sallied. Instead of attempting to fight her way through the French army that was regaining its composure, Joanna rode to Brest. Here she secured the port for her cause and readied it for the arrival of the anticipated English relief. This was achieved quickly, for only five days had passed before she was back at Hennebont.

Then the valiant countess, guessing her people would be alarmed and fearing for her, raised about five hundred troops well armed and clad and mounted, and rode from Brayt at midnight and came at the crack of dawn to one of the gates of Hennebont’s castle and entered to a triumphant blast of trumpets and drums and other instruments.

Hennebont was by now in a situation where food was desperately low. Charles of Blois was aware of this and sent the Bishop of Leon to negotiate with Joanna of Flanders. The bishop would most likely have expected the Countess to be willing to accept honorable terms. Joanna of Flanders was not moved though, as they spoke, she saw the English relief force sailing into view. Led by Sir Walter Manny, it would be strong enough to make Charles of Blois lift the siege. Joanna could reject the proposal of surrender and simply hold out for the hours that remained before the English force disembarked.

The countess immediately feared the worst, and begged them, on Our Lady’s honour not to do anything rash, for she was confident that aid would arrive within three days. But the bishop was insistent and persuasive, filling the lords with alarm and dread. He carried on next morning, until they were all but convinced that they should yield; and Sir Herve was just on his way to the town to accept their surrender when the valiant countess, looking out to sea from the castle window, began to shout in jubilation, crying with all the strength she could summon: “I see the aid I’ve desired so long!

The arrival of the English fleet was spotted by the people of Hennebont who appear to have been delighted:

All the people in the city ran to the walls to see what she had seen; and there, as plain as could be, they beheld a vast fleet of vessels, great and small, heading for Hennebont.

End of the Siege of Hennebont

The English had an immediate impact. They reinforced the town quickly and made their presence felt through deployment of archers.

So Sir Walter and all his company went armed at once, and slipped quietly through a gate, taking with them a body of three hundred archers who loosed such fine, dense volleys that they drove back the men who were guarding the engine. The men-at-arms then advanced and killed a good number, and toppled the great engine and smashed it to pieces before charging into the enemy camp and setting it ablaze.

Charles of Blois and his army fell back and the Siege of Hennebont was lifted. The legend of Joanna of Flanders had been born, with her often being referred to as Jeanne le Flamme in reference to her leading the attack that burnt much of the encampment she led the assault on.

Jean Froissart in his chronicle noted of Joanna that

with the heart of a lion, and in her hand she wielded a sharp glaive, wherewith she fought fiercely

Joanna travelled to England to try and secure additional support for the Montfort cause. English captains such as Sir Walter Manny now commanded units fighting in her name in the Duchy. Her husband was released from the Louvre in 1343 and died at Hennbort in 1345. Joanna of Flanders remained in England, at times under house arrest due to mental health problems, for the remainder of her life.

One thought on “Joanna of Flanders”