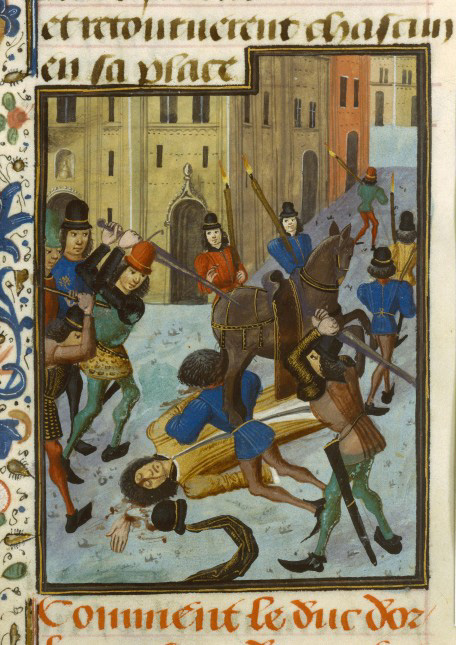 The duke was in Paris on a Wednesday night which was the Feast of Pope Saint Clement, and after dinner on that day, at about seven o’clock, he was treacherously murdered. The agents of this crime were some eighteen men who, as it was afterwards discovered, had for several days lodged at a hotel bearing the sign of Our Lady near Porte Barbette with the intention of carrying out this crime. On the Wednesday, it seems, they sent a man named Thomas de Courteheuse, one of the king’s servants and their accomplice in this, to seek out the Duc d’Orleans, who had gone to visit the Queen of France in the house she had recently purchased from Montagu, Grand Master of the King’s Household. This house was very close to the Porte barbette, and the queen was then recovering from the birth of a child which had not long survived and she had not yet completed the time of her purification.

The man Thomas approached the duke and falsely declared: ‘My lord, the king bids you to come to him without delay, because he has something concerning himself and you which he must discuss at once.’ When the duke heard this alleged order from the king he immediately leaped on his mule to answer the summons. In his company there were two squires on one horse and four or five foot servants in front and behind carrying torches: his other followers were in no hurry and he was poorly attended that day, though he maintained in Paris a staff of quite six hundred knights and squires. At the Porte Barbette the eighteen men were waiting for him in the shadow of a house with their weapons concealed from view. The night was dark. As the duke approached the gate they leapt upon him in a wild fury, and one shouted: ‘Kill him!’ dealing him a blow with his axe which severed his hand clean at the wrist.

The duke, seeing such a cruel attack made upon him, shouted out loud, ‘I am the Duc d’Orléans’, to which some of those who were striking at him answered: ‘That’s just what we wanted to know.’ At this the rest of the men joined in, and shortly the duke was knocked off his mule and his head smashed with blows that the brains ran out on the roadway. Even then they turned him over and over, so hacking at him that he was very soon completely dead. With him was also killed a squire who had been his page; when he saw his master on the ground he lay upon him to protect him, but to no avail.”