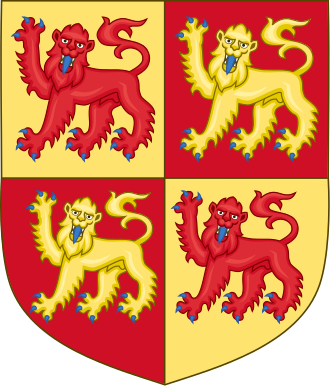 Owain was a descendant on the male line from Llywelyn the Great. He was therefore a claimant to the titles and lands that had been held by Llywelyn. Exiled due to the threat posed to himself by the English, he sought assistance from foreign powers to recover Wales from English hands, with himself being the legitimate King of Wales. On 10th May 1372, Owain issued a manifesto in Paris regarding this claim, and the support that he was to get in pursuing it:

“Whereas the Kings of England have in the past, moved by intemperance and greed, wrongly and without cause treacherously killed or put to death my forebears the Kings of Wales and expelled them by force from their kingdom and subjected a kingdom that is rightly mine as their lineal descendant and closest blood relation, I have petitioned various Christian princes, declaring my right and humbly beseeching their help. Lately I came before my most powerful and well-regarded lord Charles by the grace of God King of France and Dauphin of Vienne and showed him my right, and he taking pity on my estate and considering the great wrong that the kings of England have done to my forebears and that the present king still does to me… has supported me with his men-at-arms and ships to recover my kingdom.” [Cited in Sumption, Divided Houses]

This sounds as though Owain was set to be given a large force with which he could wage war on the English. The rhetoric would certainly inspire his countrymen and disturb any English onlookers.

In reality, the support was far from being sufficient men-at-arms and ships to recover Wales. Upon its departure at the end of May, Owain’s force was his own company of around 200 men and a French company of 165 men-at-arms. He was also furnished with a fleet of eight galleys and four barges. As a gauge of how small this force was, the French raids on the English South Coast earlier in the Hundred Years War were undertaken by a fleet of 50 galleys and, reputedly, thousands of men.

Owain’s fleet sailed from Harfleur and attacked Guernsey, defeating the English reinforcements from Jersey. The expedition to Wales was then halted with the King of France ordering the fleet to head south to engage shipping near La Rochelle.