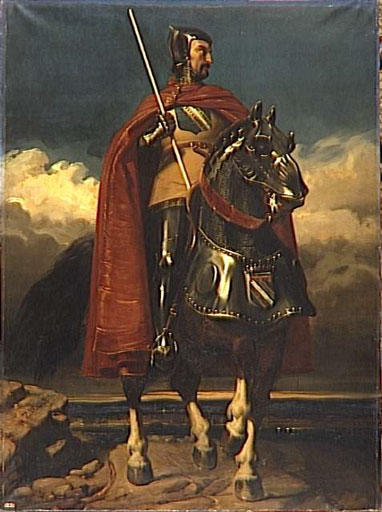 Louis was the second eldest son of the Count of Sancerre. His father fought and died in the Battle of Crecy. Following his fathers death Louis was educated alongside the children of the Duke of Normandy.

His first military experience was at the Siege of Melun in 1359. Following this he began to rise in prominence. In 1369 he was created a Marshall of France. In this role he was very successful, forcing an English retreat, aiding in the victory at Pontvallian and leading the capture of Cognac. Following these successes he was one of a number of commanders who turned down the position of Constable of France.

Following the accession of Charles VI, Louis continued to be an important figure. He helped to defeat rebels at the Battle of Roosebeke and put down civil unrest in Paris.

He became the kings Captain-General following victories in Provence. He continued to defeat English forces and was sent as an envoy to England.

In 1397 he became Constable of France. He had a number of further victories against the English before resigning positions due to ill health.

Louis had been a key commander in France’s continued fight against the English in the Hundred Years War.

One thought on “Louis de Sancerre”