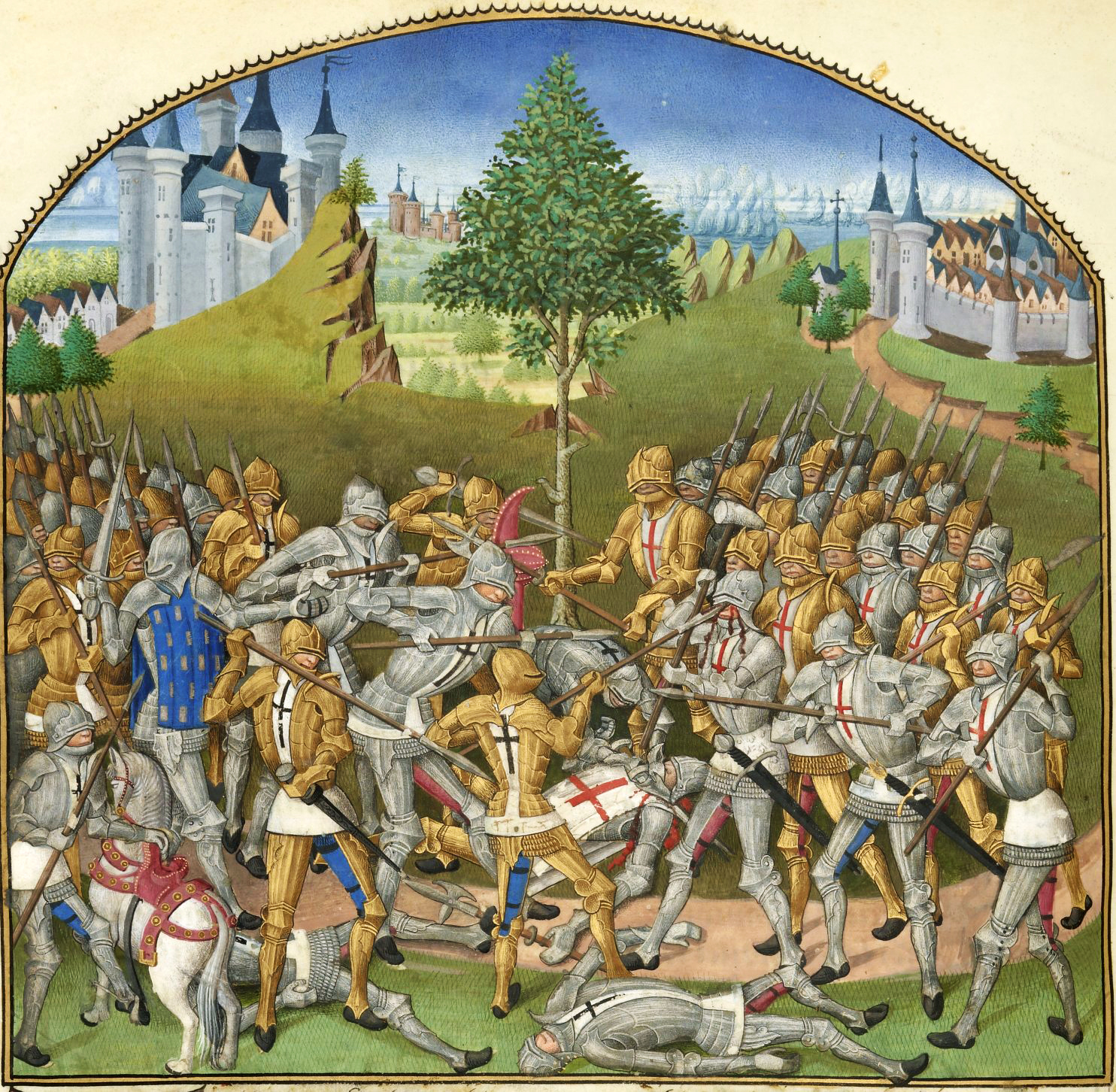 Combat of the Thirty

Messire Robert de Beaumanoir, a very valiant knight of a great family in Brittany, was castellan of Castle Joselin, where he had a great many men-at-arms of his lineage and other mercenaries.  And it so happened one day that he came to be roaming near the town and castle of Ploeremel, whose castellan was a German mercenary named Blandebourch, who had with him a great many German, English, Breton and other foreign mercenaries and who were all of the party of the Countess of Montfort.

When Messire Robert saw that none of the garrison was coming out, he went to the gate and called out this Blandebourch, under a guarantee of safety, and asked him whether he had any companion, or perhaps two or three, who wished to joust with steel lances against three others, for the love of their ladies.   Blandebourch replied and said that their ladies would hardly wish that they should get themselves killed in a single joust, for this kind of venture was over too soon.

“But,” he said, “I will tell you what we will do, if you like.   We will choose twenty or thirty of our companions  in the garrison and we will go to an open field and there we will fight as long as we can endure it; and let God give the victory to the better of us.”

“By my faith,” replied Messire Robert de Beaumanoir, “you speak very well and I vow we will do just what you say; now, pick a day.”

An appointment was made for the following Wednesday and they gave each other a firm truce up to that day; and under its terms Robert and his people departed.  So they provided themselves with thirty companions, knights, squires and others taken from the garrisons, and Blandebourch also chose thirty from all his companions.

When the day had come, the thirty companions of Blandebourch heard Mass and then armed themselves and left for the field where the battle was to take place.  And they dismounted and ordered all those who were there that none of them should be so bold as to intervene for any reason whatever.   Thus did the thirty companions whom we will call “the English;” and  they waited a long time for the other thirty, whom we will call “the French.”

When these had come, they dismounted and gave the same command.   And when they all had come face to face, they spoke a little, all sixty of them, and then stepped back a pace, each party to its own side.  And then they made all their people retreat well back from field.   Then one of them gave a signal and immediately they ran over and fought fiercely all in a pile, rescuing one another handsomely when they saw their companions in trouble.

Soon after they had come together, one of the Frenchmen was killed, but the others did not leave off fighting on this account.   They held themselves as valiantly on both sides as if they had been all Rolands and Oliviers.  In truth, I cannot say “These conducted themselves better than the others;” but they fought so long that they all lost strength and breath and  ability to fight.

It seemed a good idea for them to stop and rest, and they rested by mutual agreement.   They granted each other a truce until they had recovered and until the first who got up again should call the others back.  At this point there were four French dead and two English.   They rested a long time, and drank some wine which was brought to them in bottles, and tightened their armor which had broken and cleaned their wounds and bandaged them up.

When they had rested enough, the first who got up made a sign and called the others.   The battle recommenced as fiercely as before and it lasted a long time.  And they conducted themselves very well in this second round.   But finally the English were worsted; for as I heard tell from  those who saw it, one of the Frenchmen, who was on horseback split them up and badly trod them underfoot.  And so Blandebourch their captain and eight of their companions were killed.   Messire Robert de Beaumanoir and his men took the rest as hostages back to his garrison.  And that is how the affair went.