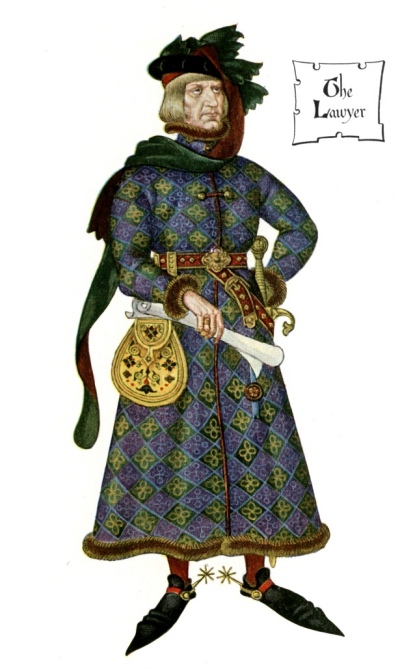 INTRODUCTION TO THE LAWYER’S PROLOGUE

The Words of the Host to the Company

Our good host saw well that the shining sun
The are of artificial day had run
A quarter part, plus half an hour or more;
And though not deeply expert in such lore,
He reckoned that it was the eighteenth day
Of April, which is harbinger to May;
And saw well that the shadow of each tree
Was, as to length, of even quantity
As was the body upright causing it.
And therefore by the shade he had the wit
To know that Phoebus, shining there so bright,
Had climbed degrees full forty-five in height;
And that, that day, and in that latitude,
It was ten of the clock, he did conclude,
And suddenly he put his horse about.
“Masters,” quoth he, “I warn all of this rout,
A quarter of this present day is gone;
Now for the love of God and of Saint John,
Lose no more time, or little as you may;
Masters, the time is wasting night and day,
And steals away from us, what with our sleeping
And with our sloth, when we awake are keeping,
As does the stream, that never turns again,
Descending from the mountain to the plain.
And well may Seneca, and many more,
Bewail lost time far more than gold in store.
‘For chattels lost may yet recovered be,
But time lost ruins us for aye,’ says he.
It will not come again, once it has fled,
Not any more than will Mag’s maidenhead
When she has lost it in her wantonness;
Let’s not grow mouldy thus in idleness.
“Sir Lawyer,” said he, “as you have hope of bliss,
Tell us a tale, as our agreement is;
You have submitted, by your free assent,
To stand, in this case, to my sole judgment;
Acquit yourself, keep promise with the rest,
And you’ll have done your duty, at the least.”
“Mine host,” said he, “by the gods, I consent;
To break a promise is not my intent.
“A promise is a debt, and by my fay
I keep all mine; I can no better say.
For such law as man gives to other wight,
He should himself submit to it, by right;
Thus says our text; nevertheless, ’tis true
I can relate no useful tale to you,
But Chaucer, though he speaks but vulgarly
In metre and in rhyming dextrously,
Has told them in such English as he can,
In former years, as knows full many a man.
For if he has not told them, my dear brother,
In one book, why he’s done so in another.
For he has told of lovers, up and down,
More than old Ovid mentions, of renown,
In his Epistles, that are now so old.
Why should I then re-tell what has been told?
In youth he told of Ceyx and Alcyon,
And has since then spoken of everyone-
Of noble wives and lovers did he speak.
And whoso will that weighty volume seek
Called Legend of Good Women, need not chide;
There may be ever seen the large wounds wide
Of Lucrece, Babylonian Thisbe;
Dido’s for false Aeneas when fled he;
Demophoon and Phyllis and her tree;
The plaint of Deianira and Hermione;
Of Ariadne and Hypsipyle;
The barren island standing in the sea;
The drowned Leander and his fair Hero;
The tears of Helen and the bitter woe
Of Briseis and that of Laodomea;
The cruelty of that fair Queen Medea,
Her little children hanging by the neck
When all her love for Jason came to wreck!
O Hypermnestra, Penelope, Alcestis,
Your wifehood does he honour, since it best is!
“But certainly no word has written he
Of that so wicked woman, Canace,
Who loved her own blood brother sinfully.
Of suchlike cursed tales, I say ‘Let be!’
Nor yet of Tyrian Apollonius;
Nor how the wicked King Antiochus
Bereft his daughter of her maidenhead
(Which is so horrible a tale to read),
When down he flung her on the paving stones
And therefore he, advisedly, truth owns,
Would never write, in one of his creations,
Of such unnatural abominations.
And I’ll refuse to tell them, if I may.
“But for my tale, what shall I do this day?
Any comparison would me displease
To Muses whom men call Pierides
(The Metamorphoses show what I mean).
Nevertheless, I do not care a bean
Though I come after him with my plain fare.
I’ll stick to prose. Let him his rhymes prepare.”
And thereupon, with sober face and cheer,
He told his tale, as you shall read it here.
HERE ENDS THE INTRODUCTION

3 thoughts on “Introduction to the Lawyer’s Prologue”