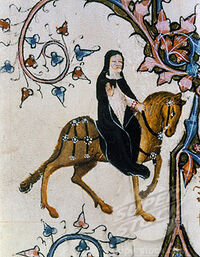 O Lord, Our Lord, Thy name how marvelous
Is spread through all this mighty world,” said she;
“For not alone Thy praise so glorious
Is given by men of worth and dignity,
But from the mouths of children Thy bounty
Is hymned, yea, even sucklings at the breast
Do sometimes Thy laudation manifest.
“Wherefore in praise, as best I can or may,
Of Thee and of that pure white Lily-flower
Who bore Thee, and is yet a maid alway,
I tell a tale as best is in my power,
Not that I may increase Her heavenly dower,
For She Herself is honour and the one
From Whom spring wealth and goodness, next Her Son.
“O Mother-Maid! O Maiden-Mother free!
O bush unburnt, burning in Moses’ sight,
Who ravished so the Soul of Deity,
With Thy meekness, the Spirit of the Light,
That His virtue, which was Thy soul’s delight,
Conceived in Thee the Father’s wise Essence,
Help me to speak now with all reverence!
“Lady, Thy goodness and Thy generous grace.
Thy virtue and Thy great humility-
No tongue may say, no pen may fully trace;
For sometimes, Lady, ere men pray to Thee.
Thou goest before, of Thy benignity,
And givest us the true light, by Thy prayer,
To guide us all unto Thy Son so dear.
“I cannot bear the burden, blessed Queen,
Of fitly praising all Thy worthiness,
My wisdom and my knowledge are too mean;
But as a child of twelve months old, or less,
That scarcely any word can well express,
So fare I now, and therefore do I pray,
Guide Thou that song of Thee which I shall say!’
Explicit

Image of the Prioress from the Ellesmere manuscript of The Canterbury Tales. The manuscript is now in the Huntington Library, San Marino, California.