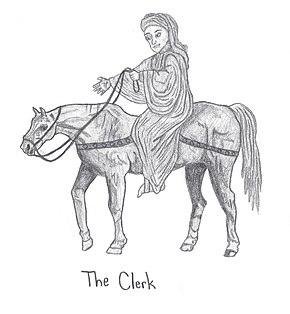 ENVOY OF CHAUCER
Griselda’s dead, and dead is her patience,
In Italy both lie buried, says the tale;
For which I cry in open audience,
That no man be so hardy as to assail
His own wife’s patience, in a hope to find
Griselda, for ’tis certain he shall fail!
O noble wives, full of a high prudence,
Let not humility your free tongue nail,
Nor let some clerk have cause for diligence
To write of you, so marvelous detail
As of Griselda, patient and so kind;
Lest Chichevache swallow you in her entrail!
Nay, follow Echo, that holds no silence,
But answers always like a countervail;
Be not befooled, for all your innocence,
But take the upper hand and you’ll prevail.
And well impress this lesson on your mind,
For common profit, since it may avail.
Strong-minded women, stand at your defence,
Since you are strong as camel and don’t ail,
Suffer no man to do to you offence;
And slender women in a contest frail,
Be savage as a tiger there in Ind;
Clatter like mill, say I, to beat the male.
Nay, fear them not, nor do them reverence;
For though your husband be all armed in mail,
The arrows of your shrewish eloquence
Shall pierce his breast and pierce his aventail.
In jealousy I counsel that you bind,
And you shall make him cower as does a quail.
If you are fair to see, in folks’ presence,
Show them your face and with your clothes regale;
If you are foul, be lavish of expense,
To gain friends never cease to do travail;
Be lightsome as a linden leaf in wind,
And let him worry, weep and wring and wail!
HERE ENDS THE CLERK OF OXFORD’S TALE