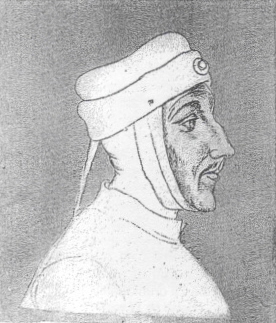 Louis de Mále was the Count of Flanders. As such, he was a much coveted ally in the Hundred Years War. Flanders had, from the beginning of the conflict, been part of the English alliance against the Kingdom of France. Geographically, this was significant, offering Edward III ports, troops and a series of strongholds against France’s northern borders from which campaigns could be launched. Bordering Edward IIIs other European allies, Flanders, and its Count, were pivotal to English strategies against the French.

The alliance had proven to be successful. It had benefitted the English by opening a front that would require France to expend many resources. For the Flemish, the rewards economically were worthwhile, bringing much wanted English Wool to market in the province. The presence of English forces also enabled Flanders to retain its largely independent status.

When Edward III landed in France in 1346, the alliance with Flanders and the other Duchy’s of the Low Countries had held firm. Edward’s campaign had seen the great victory, at Crecy, and France had been thrown from one crisis, to another. The victory came at a cost though. Louis I, Count of Flanders, was among the dead on the battlefield. And his son and heir, Louis II (de Mále), held the English responsible.
The years after the Battle of Crecy saw diplomatic efforts to engage with the new Count of Flanders. His grief was understandable, his loss could be compensated, his support was much needed. The English were very confident in acquiring his ongoing support. First, the citizens of Flanders had made it clear in words and actions, that they wanted the arrangements with England to continue. So much so that the new Count was closely watched, to prevent him taking off to France. Whilst Louis may be grieving, simple pragmatism meant that he would need to take his subjects views into account. Second, England had offered Louis the hand of Princess Isabella. In 1347, the intention for Louis to marry the English Princess had been agreed at Dunkirk.

Louis, however, had simply agreed to the marriage for purposes of political expediency. His betrothal to Isabella eased pressure on him from both his own subjects and the English. As this happened, he made alternative plans, to marry Margaret of Brabant, and to switch his allegiance to the French.

In 1351, the conflict between England and France saw Louis once again under pressure. He had made his promise to marry Princess Isabella, was allied to England, and was now being asked to launch an immediate offensive, as Edward IIIs own forces were in need of assistance.
Louis evaded the issue as best he could, not committing any men. John of Gaunt was sent to make the Count additional offers of funds in return for prompt support. Louis, on hearing that John was on his way, fled Flanders to Northern France.

At Fontainebleu, Louis de Mále met with King John II on the 14th of July 1351. He agreed a treaty with France, ending his alliance with the English. For Edward III, it was potentially disastrous in his quest for victory against France. His main continental ally had now defected.
Neither the Flemish, or French, adhered to the terms of the treaty that Louis II and John II agreed at Fontainebleu. The financial promises made by the French never materialised, nor did Louis II raise any armies to serve under John II. England, however, had for now, lost an important ally.